Highlights from the 2015 Broadband Communities Summit 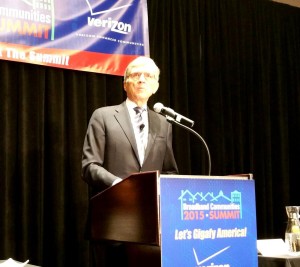 FCC Chairman Wheeler made his case for muni broadband in Austin. (Photo via @bbcmag)

Our work at KC Digital Drive starts with community—first and foremost with our local community in Kansas City, but also with the global community of cities who are working on the same sort of digital transformation projects in their cities, from digital inclusion to next-generation Internet use cases.

For the fourth straight year, I spent some time this week at the Broadband Communities Summit in Austin. This was the first broadband conference I ever attended back in 2012, before the Playbook was even published. The crowd then seemed composed mostly of rural and smaller communities who viewed broadband as a path to economic competitiveness and apartment/condo building owners who were trying to understand how to outfit and market their properties with connectivity features. A year later—in 2013—Mayor James and Mayor Reardon received the conference’s Cornerstone Award for the Playbook and helping to launch KC Digital Drive.

This year, FCC Chairman Tom Wheeler delivered a rousing keynote to a packed room full of policy makers; city, state and federal officials; non-profit partners, Internet service providers, and the whole array of technology companies who actually go about building the Internet. If you’ve been following the FCC story this year regarding Title II, municipal broadband and net neutrality, you’ll understand why all these people listened with interest. (Read his full remarks here.

My conclusion: broadband has come a long way.

Here are a few highlights from several of the keynote addresses in Austin, beginning with Wheeler:

I also participated in a couple of panels—one on how important marketing is in a successful broadband deployment, the other on the need for building local coalitions. People remain intensely interested in what is going on in Kansas City, and it’s great for people to continue sharing that story. BHC Rhodes, an Overland Park-based engineering company, continues a strong presence at fiber events. And some of the folks who help run MetroNet, which builds and operates fiber networks mostly in Indiana, make their home in the Kansas City area.

In closing, we at KC Digital Drive spend a fair bit of time traveling in order to make sure Kansas City is well-represented in these broader conversations. And because people around the world are interested in the work we’re doing and how they can learn and build from our successes and mistakes. This sharing is part of how we lead. But it’s also how we learn. By participating in events around the country, we’re able to grow the number of networks that have Kansas City nodes, to find new ideas and opportunities, and to bring more of them back to our local community.

These experiences show up in individual meetings, work groups, and ongoing programs like 1 Billion Bits and Code for KC. But we haven’t made a habit of documenting and sharing here the conversations we’re taking part in. We’ll start doing a better job of that. And we invite others from the community who are representing Kansas City in conversations about building our digital future to do the same.