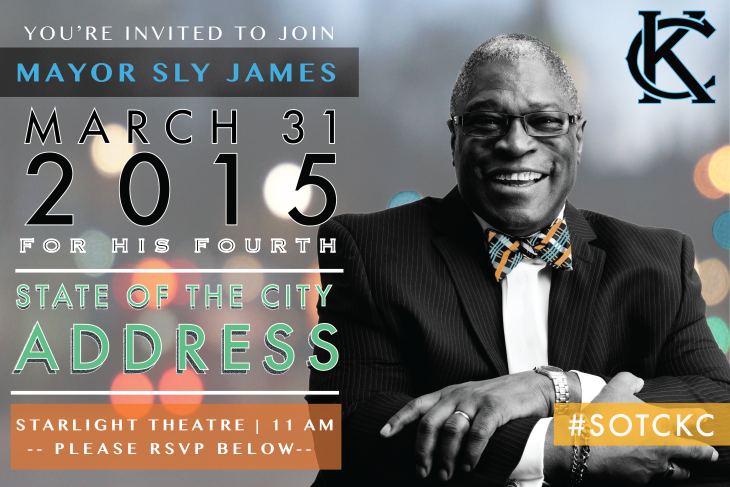 As befitting an administration that has made technology adoption a high priority – and not just via the Mayor’s active Twitter presence — the Mayor’s talk mentioned several new tech developments worthy of watching.

Analysis: The Digital Roadmap is a strategic plan out of the City Manager’s office under Chief Innovation Officer Ashley Hand. It was developed with a free assist from Bloomberg Associates, former NYC mayor Michael Bloomberg’s smart-city consultancy. It outlines objectives under five strategic areas: Digital Inclusion, Open Government, Engagement, Industry and Smart City. Essentially, it’s a plan for KCMO to deliver better services to citizens digitally, use data intelligence to boost efficiency, and to foster a better climate for the tech economy. Many cities have these (the wider KC metro has its own Playbook), and it’s great to see KCMO adopt its own.

What Sly Said: “A Smart City is a technological framework that, for starters, will bring features like interactive kiosks, mobile applications, sensory technology, and smart street lighting to Kansas City. Kansas City is once again the envy of its peers because we do things like this, drawing deeply from our entrepreneurial spirit and our technology assets.”

Analysis: Though he didn’t mention the project by name, the mayor is likely alluding to the Cisco Smart + Connected Communities project that is expected to deploy in downtown KCMO sometime in the next year-ish. Details have been scarce, but the project would likely involve the kinds of technologies the Mayor refers to (interactive kiosks, smart lights, etc). Granted, the Cisco project, which focuses alongside the streetcar line, is part of a wider discussion of what would make KC smart. There’s also the scrappy software apps developed in cubicles and bedrooms throughout the metro. Check out the presenters from the Civic Apps Showcase for some examples.

What Sly Said: “As a result of an Open Data Ordinance passed last June, more data about our city is more readily available to the public than at any time in our city’s history. An information search that used to mean a trip to City Hall is now available online from anywhere in the world, virtually instantly. I believe open, transparent government is fundamental to an efficient and effective democracy. The Open Data Portal allows that.”

Analysis: You can’t have a smart city without open, usable data. KC made a necessary upgrade in passing the ordinance and providing citizens with reams of data via the portal at data.kcmo.org. From the city budget to the dangerous buildings list to graffiti requests in midtown, you can access gobs of data about how the city works. Using it to make real-world decisions is the hard part, but data is the lifeblood for civic innovation. For examples of this in action, KC Digital Drive hosts Code for KC, a Brigade of local civic hackers that meets every week to use this data to develop apps to make government work better for citizens.

4. Digital Literacy Is a Civic Priority

What Sly Said: “In today’s world, a well­trained workforce is not an amenity. It is a necessity. That is why we must close the digital divide. Digital connectivity is expanding thanks to Google Fiber and other firms who are now adding high­speed internet service. We are working with my Challenge Cabinet, the Kansas City Public Library, Literacy Kansas City, KC Digital Drive, Connecting for Good, and Urban Tech ­­ to narrow the digital divide. To take full advantage of the bigger digital pipelines for which Kansas City is becoming nationally and even internationally known, we must make computers, the internet, and digital literacy training accessible to all.”

Analysis: Yes! Harking back to when Mayor James tied early childhood literacy to economic development with Turn the Page KC, this emphasis on digital inclusion acknowledges the importance of having a workforce with the skills necessary to compete in a digital world. Google Fiber’s arrival resulted in many of our neighborhoods having access to world-class gigabit-speed connectivity, including some of our poorest parts of town. Meanwhile, with tech-based companies like Cerner looking to expand in the market, there are more open IT jobs than local bodies to fill them. Of course, many people who could get access either can’t afford it or don’t know what to do with it, and that’s where many of the organizations Mayor James namechecked come in, including us. Look for a comprehensive Digital Inclusion Plan for KC soon.

What Sly Said: “We’re doing that [bridging the digital divide] with two initiatives: Earlier this month, I traveled to Washington, D.C., for President Obama’s announcement of the White House TechHire Initiative, a program that includes Kansas City and 18 other cities and 2 states. Working with the Full Employment Council, Think Big Partners Kansas City, Metropolitan Community College and the University of Central Missouri, we are launching Reboot U., an accelerated, job­specific training curriculum and internship program.

“In addition, we’re making tremendous strides in bringing LaunchCode to Kansas City. LaunchCode brings together workforce agencies, city governments and learning programs on one side with tech employers on the other. Together, they evaluate the skills of workers and provide learning to fill company workforce needs. According to the latest available data from the Kauffman Foundation in 2013, Kansas City had more than 7,400 net new jobs among businesses younger than five years old.”

Analysis: Remember those ‘90s TV ads for getting a computer certificate in six weeks through DeVry or wherever? That’s become an economic development must-have, now that our nation and its local economies recognize they need skilled homegrown workforces to fill jobs in the new economy. The President’s TechHire is one such program – it uses universities, community colleges, and non-institutionalized “coding boot camps” to get the job done. Funded with a $500K grant from the Missouri Division of Workforce Development, Reboot.U will focus on teaching coding skills to the chronically unemployed. Launchcode, meanwhile, is a St. Louis-based nonprofit that provides apprenticeships and job placement in technology.

What Sly Said: “As long as I am around, we will continue to foster our entrepreneurial mindset, fueled by assets like the Kauffman Foundation, KCSourceLink, Think Big Partners, and the Sprint Accelerator. We’ll do it with programs like LaunchKC, which today will begin accepting applications for $50,000 grants from early­stage tech entrepreneurs. Up to 10 start­ups will receive these grants at Techweek Kansas City next September. We can hope that there will be another Cerner, or two, among them.”

Analysis:  Another Cerner would be cool, but so would another Dropbox or Slack, especially if they came from KC. To that end, we enthusiastically recommend early stage tech startups who are either already local or are willing to relocate to Kansas City – because that’s the whole point of this – to apply to LaunchKC Grants before the July 2 deadline.

We all know Kansas City has a ways to go toward competing with the tech capitals on the coast. But thanks to leaders like Sly James — who have taken sound assessments and built solid, action-oriented plans like the Roadmap and Playbook — we now have a sense of how far and what specific steps we need to take get there. And if KC Digital Drive has its way, we will.