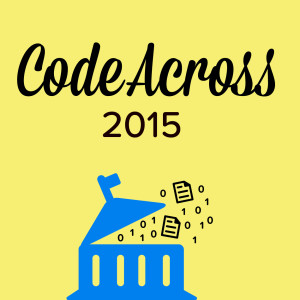 This Monday, Feb. 23, a group of nearly 40 politicians and app builders are converging at Union Station’s City Stage for the city’s first ever KC Civic Tech Forum and Showcase.

And that’s just the folks on stage.

Tickets are “selling” fast (they’re free but you gotta register), so don’t wait to get your spot in the audience for this unique event.

In the first part of the event, aka the Civic Tech Forum (3-5pm), KCPT’s political flamethrower Nick Haines will fire questions at candidates from all six KCMO districts, core sampling the political community’s attitudes on how technology can benefit the city. If you’re in any way invested in the city’s future as it pertains to technology (think Google Fiber, the Startup Village, schools, infrastructure, health, … just about everything), you’ll want to be there. Find out more here.

Then, after a break for some snacks and a cash bar from 5-6pm, the Civic Apps Showcase will begin. Starting at 6pm, ten brilliant creators of applications that make cities work faster, smarter and better will give quick, 5-minute Ignite-style presentations showing off their apps.

Both events are part of Code for America’s CodeAcross celebration, an event series designed to get technology advocates actively involved in their community.

Here’s who’s presenting in the showcase, along with a description of each project in their creators’ own words:

What does it do? “We designed a system for predicting water/sewage related issues in Kansas City using 311, weather, street centerline, and census data. This system will hopefully be used by the city to help proactively identify problems, coordinate preventative maintenance, support capacity planning/resource allocation, and generally improve the reliability of the city’s water infrastructure.” – Piero Ferrante, CEO – UrbanIQ

What does it do? “Structural Fabric is a community-focused tool that allows the public to discover and contribute information about the physical world around them. Users can uncover pertinent details about how the structures in their area came to be, including construction dates, historical photographs, and related people biographies.” – Corey Light, founder

Launched: Currently in use in Cass County, Mo.

What does it do? “We’ve stitched together capabilities to aid in the work of City Managers. Our app provides interactive, purpose built data visualizations to help local government agencies set budgets, plan operations and manage risks.” – Steven Bennett, founder

What does it do? “A small tag would be worn by a young child who does not carry a smartphone (typically up to the age of 9). The tag emits a secure wireless signal periodically for geo-fencing and geo-tracking by caregivers. An app on the caregiver’s phone runs in the background and opportunistically collects and securely reports the data without active involvement of the user. The information is sent to a cloud server so that the parent may be able to confirm the whereabouts of the child. When a child goes missing, a parent can issue an alert that will, in turn, inform volunteers to monitor signals from the missing child.” – Baek-Young Choi, Associate Professor at the Department of Computer Science & Electrical Engineering, UMKC

What does it do? “An interactive mapping tool for community projects throughout the Kansas City metro area that hopes to accomplish three goals: (1) Develop a one-stop shop for finding out about community projects happening in Kansas City. (2) Create an opportunity for collaboration among various neighborhood entities. (3) Raise awareness of all of the good things happening in our neighborhoods.” – Ashley Sadowski, project lead

What does it do? “Inspired by MindMixer’s work with nearly 1,000 communities over the past four years, mySidewalk is a website for civic-minded people to connect and have conversations on the issues they care about most, like education, elections, and the economy. In short, it’s the place where they can be more informed, inspired, and involved where they live.” – Jennifer Funk, mySidewalk

What does it do? “This dashboard app built on the city’s open data portal provides citizens with better updates and notifications about their 311 requests to the City of Kansas City, Missouri. It is a volunteer-built project that grew out of the Code for America KC Brigade’s weekly meetups. ” – Paul Barham, Code for KC Captain

What does it do? “VoteSharp is a web and mobile (iOS) app for constituent communications tracking, micro- & macro-targeting and mapping. The KanVote Subscription Service allows voters to pay a $10/year subscription fee to have their advance ballot applications completed for the year and then mailed to them to them at home to be signed and delivered via pre-stamped enveloped to the election office.” – Stephanie Sharp, founder

What does it do? “PublicWay mashes data from existing municipal systems without the need for a centralized database. City workers, officials, and the public can view open work orders, 311 calls, and projects all in the same view. The Airspace Awareness Tool helps city contractors check for clearance restrictions within the same environment as PublicWay.” – Wes Hardin, Burns & McDonnell

To find out more about the Code for America KC Brigade, including how to volunteer your skills at Brigade meetups, visit codeforkc.org.