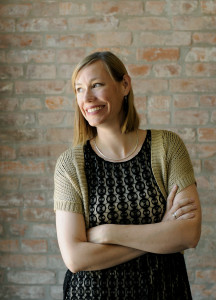 Dominique Davison wants to change the way we build.

Dominique Davison has been running her own architecture business for 10 years.

But as the leader of a brand-new startup, she’s new to the ways of tech entrepreneurship.

Making matters even tougher: Davison has chosen to build a business that works best over gigabit-speed Internet.

Davison is founder of the KC-based architecture firm DRAW Architecture + Design. But in her spare time, she is upstart CEO of PlanIT Impact.

PlanIT Impact is an interactive tool to help designers, planners, developers and students better understand an architectural project’s impact at the earliest stages of the planning and design process.

Pulling boatloads of data from sources such as the U.S. Department of Energy, NREL, Data.gov and many others, PlanIT Impact harnesses the speed of the gig to take big data and turn it into information which planners can use to make smarter, more sustainable decisions.

Now a full-fledged startup with a pilot app in search of users, PlanIT Impact was pollinated at KC Digital Drive’s 2013 Hacking the Gigabit City hackathon. It was there that Davison connected with a team of passionate techies including Chris Morris, a software developer, and Andrew Hyder, then a Code for America fellow.

“PlanIT impact was just a glimmer in my eye, an idea that I wanted to develop,” Davis says. “And through the process of the hackathon and the connections that KC Digital Drive allowed us to make, we were able to put together a team that really launched the effort of creating PlanIT Impact.”

Since its inception at the hackathon, PlanIT Impact has gone on to receive a grant from the Gigabit Community Fund through Mozilla and KC Digital Drive. It has also participated in the 2015 Global Cities Team Challenge for IoT and smart city developers organized by US Ignite and NIST and been a stalwart in the US Ignite gigabit apps stable.

In addition to generating funds, these accomplishments have catapulted Davison and PlanIT Impact into the sphere of national civic tech innovators working to create applications that will change the way cities function.

“There have been an enormous number of opportunities that have opened up to us that have allowed us to really engage in this community of tech entrepreneurship,” Davison says.

The latest opportunity took Davison to Chattanooga, where, over the summer, she and her team participated in the GIGTANK program, an accelerator aimed at high-bandwidth applications.

It was there that Davison learned she needed to accelerate her own plans.

“We went in thinking we will be a company in it for the long haul and do it slow and steady,” she says. “We realized we need to go out there with guns blazing, go for investment, and do it now.”

To learn more about what Davison is building, visit planitimpact.com.

Check out a video of Davison discussing the local gig economy:

END_OF_DOCUMENT_TOKEN_TO_BE_REPLACED

Founded in 2017, TheraWe Connect has a goal to bridge the learning gap between the home and the therapy center for parents of children with developmental disabilities. Their mission is to improve patient outcomes and make day-to-day life better for therapy practitioners and caregivers.  TheraWe’s founding team and advisory board bring experience in several child […]