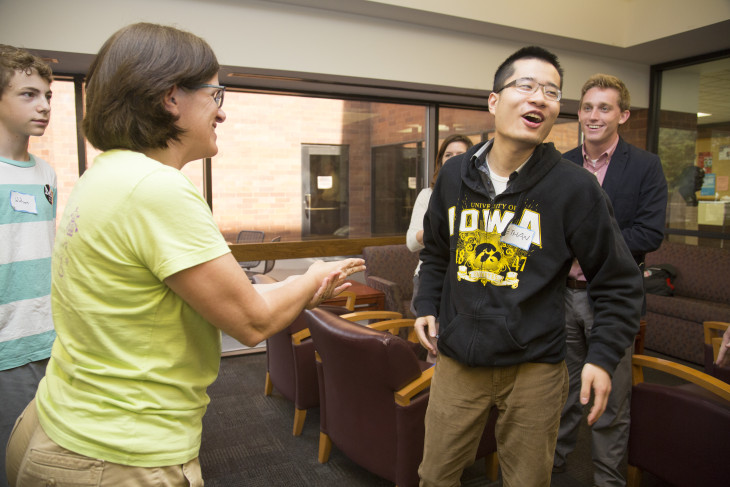 Martha McCabe of the KC STEM Alliance triumphs against hacker Ethan in a distinctly low-tech round of Paper, Rock, Scissors (Photo by UMKC)

This past weekend in the hallways, student lounges, classrooms and mock courtrooms of the UMKC School of Law, nine teams of 60 community leaders, do-gooders, and web developers worked together to build technology tools to make Kansas City better.

June 6-7, 2015, marked the third annual local celebration of the National Day of Civic Hacking. It’s a day when tech advocates and civic activists across the country convene under the “Hack for Change” banner to dream up – and if all goes well, begin to code – apps to help cities work better.

This year, 106 communities participated in the event. Kansas City’s NDoCH event – HackKC for short – was a two-day hackathon co-organized by the Code for KC Brigade and KC Digital Drive.

Also lending support were the forward-thinking faculty of the UMKC School of Law. Dean Ellen Suni and professors Michael Robak, Jim DeLisle and Tony Luppino have shown an impressively innovative mindset in teaching their students how to use techie tools like Github and Balsamiq and to harness open data sets to create apps for industries like law, government and real estate. They also showed fortitude in spades, hunkering down with the students for large portions of the 16-hour hack.

Crucial to the weekend’s success was pulling together teams in the months leading up to the event. KC Digital Drive worked with Code for KC Captain Paul Barham to recruit and meet with team leaders representing community organizations who could use some hacking help.

Barham, a freelance software engineer by day, spent countless volunteers hours meeting with leaders to make sure that when they sat down with coders at the hackathon kickoff, they would have a clear path for work throughout the weekend. Also critical was ensuring they had enough direction to sustain them through to November 2015, when the projects born at the hackathon are scheduled to be ultimately launched into the community.

Despite all this human bandwidth, not all of the ideas pitched at the kickoff Saturday morning made it through to the end. Following opening remarks from Dean Suni and Kansas City, MO Chief Innovation Officer Ashley Hand, 11 would-be team captains presented their ideas to a roomful of coders and idea-movers in hopes of getting their help in making those ideas into reality. 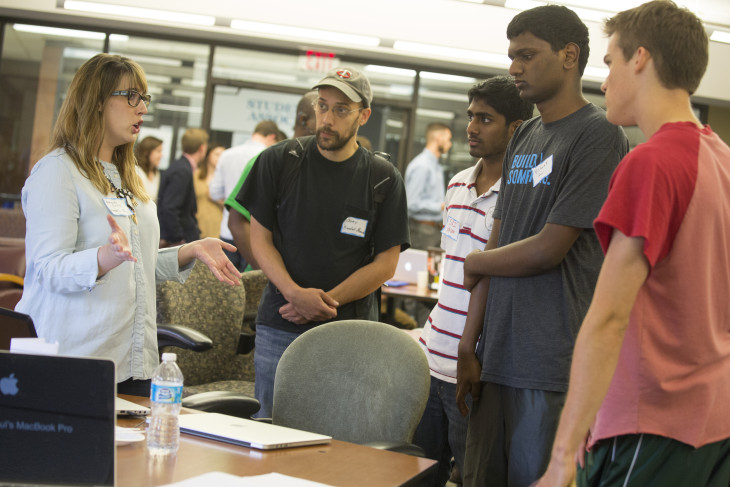 Cynthia Ammerman from Historic Kansas City (left) talks to hackers about her idea. (Photo by UMKC)

Shortly after the opening volley of pitches, the teams coalesced and began spreading out among classrooms to start whiteboarding. A help desk manned by Brigade volunteers including Dave Johnson, Mary Row, and Eric Roche, who is Kansas City’s open data coordinator, provided tech support. Not all the teams listed above found traction. Their members either went home or were absorbed into other teams.

Also, by the end of day 1, two teams – Historic KC and STEM Map – had reached a significant enough milestone that they would take day 2 off. Others had more work to do.

And work they did, right up until it was time to give progress reports to the entire crew late Sunday afternoon. 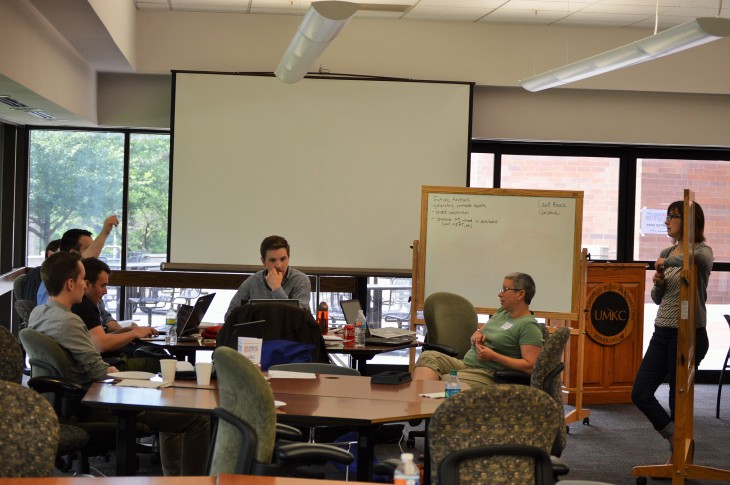 The N-hood team deliberates in the student lounge. (Photo by Jason Harper)

Though no teams came out of the hackathon with a fully finished app, all teams made strong showings. Each team will continue to work on their projects over the next several months at regular Code for KC hack nights, with the ultimate goal of launching them to the public this coming November.

WikiKC – WikiKC is available to the public for updates as well as a source of information.  A central location for Kansas Citians to tell about the great lunch they enjoyed in Brookside, or tell how exciting the Kansas City Kite Festival will be this year (don’t forget your chairs!). (wikikc.org)

N-hood – Changed its name to KCNeighborhoodStat throughout the process. Empowering neighborhoods through better data seeks to help people fix problems by understanding them with data. By the end of the weekend, KCNS had built the beginnings of an interactive finder that lets you type in your address and see things like your neighborhood map, crime statistics, 311 requests, and more. (github)

CommunityKC – User goals and needs have been determined; mobile adaption has been added.  The team is working on a redesign; the first page features a Kansas City map with a text based interface.  When the user clicks a pin on the map, the user will see a picture, high level information and then additional details and photos.  A print format has been added, designed at user request, so that users can print a single page to use as handouts for current events.  The interface has been kept very simple for the users who may not be technically savvy. (github) 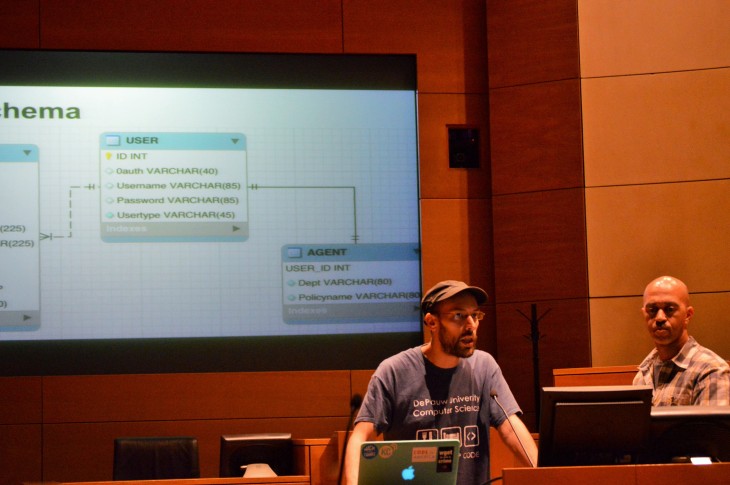 SafeAssist – Developed back-end framework for an app that will provide first responders critical information regarding individuals who may have a physical and/or mental challenge. The public will go to a webform and enter information about a loved one with special needs (e.g. autism or Alzheimer’s). The police or EMTs can quickly access that information on the way to an emergency call to have that info in hand to inform how they handle the call. (github)

Parcel Assessment Tool – A GIS-based zoning app that gives a potential builder data regarding a specific parcel of land, such as current land use, zoning rules, the size, what options may be available for that piece of land, all the way down to the required square footage and parking with that project.  This project will benefit individuals and organizations interested in property management and development. (github)

Storefront Street Tree Initiative – A public facing page was created with an app behind it on MEAN stack. The goal is to help those who want to add trees to city streets.  Southwest Blvd has been the pilot. The first pain point was a lack of trust; user experience and functionality has been delayed as surprising complex issues were discovered. (github)

Smart Cities Data Sharing Agreement – The UMKC Law Technology and Public Policy Course created the basis for an online process to reach a customized agreement around the sharing of data collected by IoT devices in a smart city environment such as the one being built right now in Kansas City.  Strategically including the critical clauses and elements from multiple resources, the Data Sharing Agreement currently has 26 clauses.  This contract is currently automated with editable fields; open variables allow later editing.  HIPPA and FERPA are being reviewed. (github) 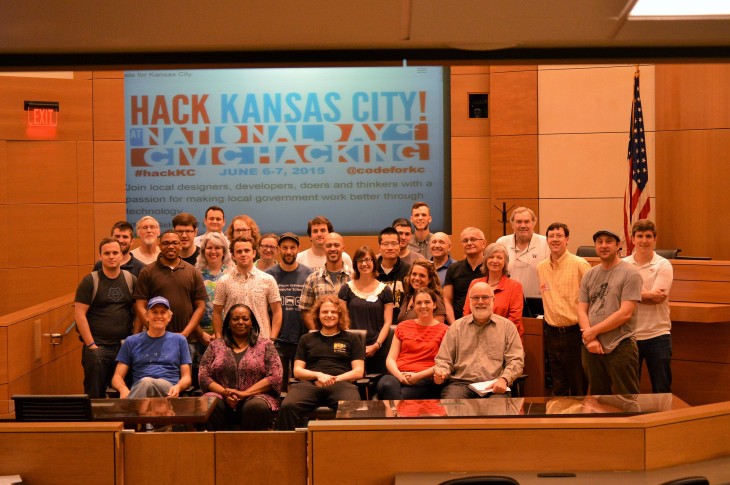 HackKC would not have been possible without the generosity of our sponsors: