UMKC School of Law Gets Hacking Help from Local Coders 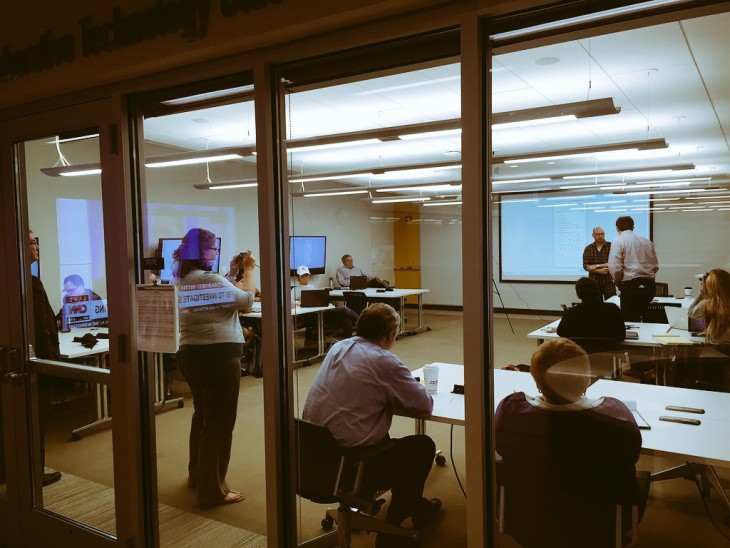 They had the ideas, the willing students and the drive to build discruptive apps for the legal profession.

What they didn’t have were the technies who knew how to turn those ideas into code.

The UMKC School of Law team of Director of IT, Michael Robak; Professor of Law, Tony Luppino; and Dean of the School of Law, Ellen Y. Suni have worked together to pioneer projects and coursework that would teach skills to graduates.

Unlike say, healthcare, the legal field has not shifted as quickly to tech as other industries. As a result, technology-focused education is not something a lot of law schools currently offer, Robak says, and therefore it’s something that differentiates UMKC.

“At UMKC, we’re part of a small group in academia that’s focused on how to train law students to use technology, understand its implications and inform their practice,” Robak tells KC Digital Drive.

As part of his capstone class “Special Topics in Law, Technology and Public Policy,” Robak is partnering with the MIT Media Lab to organize “prototype jams” each semester – hackathon-style events where students, teachers, and community partners get together to spin up projects built on code.

Robak and his team are also getting a hands-on boost from Code for KC, a volunteer-driven chapter of the Code for America network that is hosted by KC Digital Drive and led by veteran software developer Paul Barham.

At the next prototype jam, Saturday and Sunday, April 25 and 26, at the UMKC School of Law, Robak’s students as well as students from the Bloch School of Management will work side-by-side with Barham and his Code for KC volunteers building apps to address problems such as:

Joining Barham are Oleh Kovalchuke, the Brigade’s UX Architect, and Ron House, its Developer Evangelist and resident GIS expert. Barham, Kovalchuke, and House will each work on a student team to advance projects toward prototype phase. The prototypes will be unveiled Sunday afternoon in a demo session that is open to the public.

And it doesn’t end there. Several of the projects will move on to further development at Hack KC, the National Day of Civic Hacking hackathon scheduled for June 6-7 and co-organized by Code for KC and KC Digital Drive. The only local civic hackathon of 2015, Hack KC will also be held at the UMKC School of Law. (To sign up for the hackathon, visit codeforkc.org/ndoch15)

For Robak, the Code for KC – UMKC collaboration is a match made in digital heaven.

“Thanks to Paul and Code for KC, we’ve got the people we need to advise us when it comes to tech,” he says.

In other news from the collegiate front, KC Digital Drive’s GigHacks hackathon, May 1-3 at the Google Fiber Space, will welcome the winning team from OneDayKC on April 24. The daylong contest is aimed at getting local, entrepreneurially inclined college students together to build and launch companies solving social problems in a single day. The team with the best idea will get the chance to enlist high-level developers participating in GigHacks to work to build out their project the weekend of the Hackathon. To sign up for GigHacks, go here.