GigHacks Hackathon Announced for May 1-3 at Google Fiber Space

Kansas City Teams Up with San Francisco, Chattanooga and Burlington for GIGHACKS, a 2-day Hackathon to Ignite the Gigabit Experience.

A recent NPR story said using our current technology on a gigabit network is “like riding a bicycle on NASCAR track.”

Here at KC Digital Drive, we say it’s time to throw out the bike. We want to strap on the warp engines of tomorrow and ride the gigabit lightning into impossible futures!

That’s why we’re asking all Kansas City developers, designers, doers and dreamers to join us May 1-3, 2015, for GigHacks at the Google Fiber Space (1814 Westport Road).

GigHacks Is No Ordinary Hackathon

Thanks to our friends and co-organizers Orange, US Ignite, and the Mozilla Foundation, GigHacks will be happening simultaneously in our sister-gig cities of San Francisco, Chattanooga, and Burlington, with chances for cross-city teams to collaborate in realtime.

Picture a fully wired room full of techies like yourself surrounded by food, caffeinated beverages, robots, virtual reality goggles, live music jam sessions, and the thrill of getting to be among the first to create apps for the gigasphere.

How Do I Join GigHacks?

Developers, designers, UXers and futurists of all stripes are invited to participate. People with teams already formed and those who are looking to join as individuals are welcome.

KC Digital Drive will announce teams and project ideas in the coming weeks.

What to Expect When You Come to GigHacks 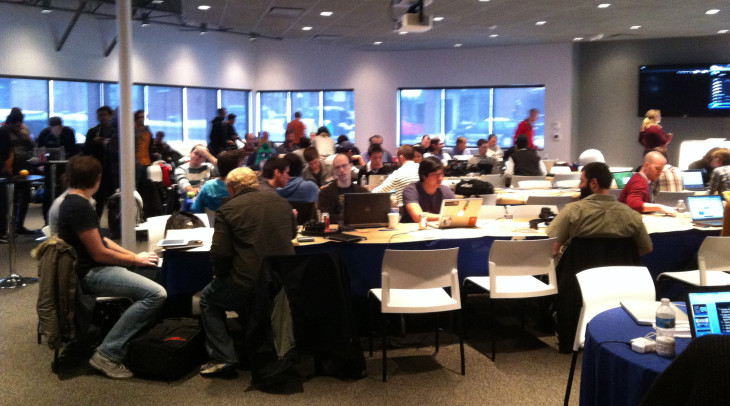 GigHacks is the third in a series of hackathons presented by KC Digital Drive. At Hacking the Gigabit City in March 2013, fourteen teams tackled the challenge of creating apps for the future of ultrafast broadband. Apps including the now-established startups PlanIT Impact and Sportsphotos.com were born.

Later that year, at the Gigabit Explorers Challenge (co-organized with US Ignite and Google Fiber), another round of teams delved deeper into the gig, coming up with ideas that launched even more business opportunities, including a tele-behavioral health app now in incubation at Sparklab. (Watch a video of the event.)

With GigHacks, our first hackathon in over a year, we plan to exploit newly emergent technologies as well as leverage connections to partners in other cities to bring ideas to reality in 36+ hours. Some of the general ideas on the drawing board include:

But when it comes to a gigabit hackathon, the sky’s the limit there are no limits.

So don’t wait for the invite via dialup. Now is the perfect time to race ahead and lend your vision and talents to the future of the ultrafast Internet!

END_OF_DOCUMENT_TOKEN_TO_BE_REPLACED

Founded in 2017, TheraWe Connect has a goal to bridge the learning gap between the home and the therapy center for parents of children with developmental disabilities. Their mission is to improve patient outcomes and make day-to-day life better for therapy practitioners and caregivers.  TheraWe’s founding team and advisory board bring experience in several child […]