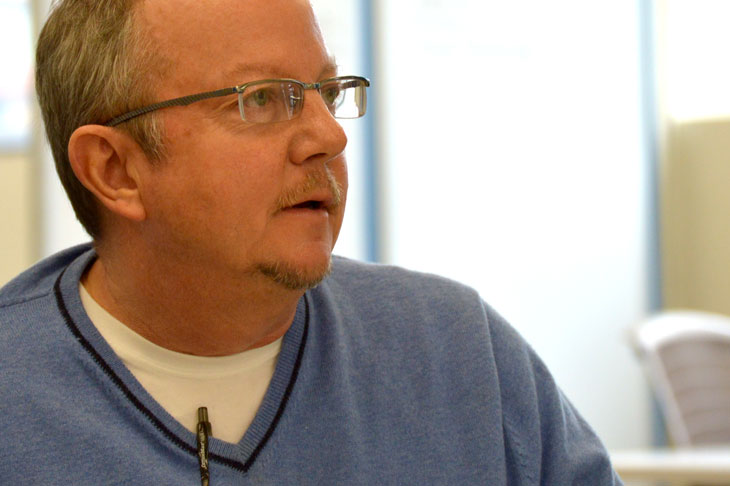 Mark Nolte is looking for a gigabit spark.

Mark Nolte walked into the Google Fiber Space one weekend two Decembers ago. He walked out with the start of a business.

The medical salesman of 30 years had been, in his own words, “dabbling in remote patient monitoring.” He had owned his own medical-device distribution company, Mark Medical, for the past 10 years, selling devices that allow doctors to monitor patients in their home.

Nolte had been gaining insight into the digital shift in healthcare by attending KC Digital Drive’s regular Health Team monthly meetings. He went to the December 2013 Hacking the Gigabit City hackathon in hopes of networking with others in his industry looking to leverage high-bandwidth technology for the healthcare industry.

Organized by KC Digital Drive and US Ignite, the event was designed to bring together coders, entrepreneurs and other technology-minded professionals to devise and launch projects or applications that required high-speed broadband Internet to work.

What Nolte discovered that weekend in the Fiber Space were not only like-minded technologists to riff on ideas with, but also the spark of a viable new enterprise.

“I was looking for a new opportunity, but I didn’t know what it would look like,” Nolte reflects. “Once I saw the potential from the hackathon, I thought this is really something.”

Nolte was placed on a team with others from the Drive/Ignite network interested in the topic of telehealth. Their mandate was to create a videoconferencing application for psychologists to consult with their patients over ultrafast broadband. After the weekend was over and the product presentations were given, Nolte wanted to keep going with the idea.

Nolte and his fellow hackathon team member Jim Braun, a seasoned videographer, launched Talk2Me in 2014. In January 2015, they were accepted into the new class of startups entering Kansas City’s SparkLab accelerator. After 90 days of intensive mentoring, product building and business-plan perfecting, Nolte and his fellow Sparklab candidates will pitch their companies to investors at demo day on April 10.

Talk2Me fills a much-needed gap in digital-video-based telehealth services. The market is already crowded with apps that provide services for physical needs, whether it’s treatment for a medical condition, nutrition, or fitness. The world of online behavioral health, such as telepsychology and telepsychotherapy, has only a few players.

Talk2Me steps into the open market providing on-demand online counseling through low-latency videoconferencing which, at 30 frames per second, is twice the resolution of videochat apps like Skype. High-definition video is important in behavorial health settings, Nolte says, where reading a patient’s body language is key in delivering good therapy. Further contrasting it from video apps available to consumers, Talk2Me is encrypted, private and HIPAA compliant.

In future phases of the product, Talk2Me will offer mobile-device capability, secure instant messaging, a content management system for therapists to tag, edit and share videos, and, later, facial recognition and anonymizing capabilities. The goal of the latter is to provide an online library of counseling sessions for educational purposes. Behavioral health students will be able to access hours of real sessions with patients whose faces have been “de-identified” — replaced with avatars that move and speak like the originals.

“You could put George Clooney’s face on mine, make my voice higher or lower, give me a Hispanic accent, and you’d never know it was me,” Nolte says.

These technology features will make the fully mature Talk2Me a true gigabit application – that is, it will need a high-bandwidth connection for all of its features to work properly. However, users who just want to talk to a therapist will be able to access the app’s licensed, certified counselors through a low-bandwidth connection on a mobile device.

Bringing affordable, accessible and private 1-on-1 counseling is at the heart of Nolte’s mission. And that mission is personal.

Not long ago, Nolte found himself on a therapist’s couch. The pressures of running his own business while raising three children were taking their toll. He was diagnosed with depression.

“Fortunately, I was able to get help,” Nolte says.

Now, with Talk2Me, Nolte wants to help people who can’t easily get help themselves. Nolte expects the majority of users to be 20-to-45-year-olds who have widely adopted technology in all parts of their lives and for whom an online counselor is an added convenience. But Nolte also wants to see adoption in rural areas, nursing homes, and inner city schools – places where access to a counselor is either non-existent or stigmatized.

“You go out to western Kansas, there’s not a psychologist for six counties,” Nolte says.

Nolte also pointed out that in rural communities, people often don’t want their friends and neighbors to know they are seeking mental health help.

Another use case for Talk2Me involves college students struggling with eating disorders. Counseling may be available while a student is home on break, but when the semester starts up, suddenly that access is cut off. Online sessions would allow continuity of care.

Other places where access to a professional therapist is limited or non-existent: nursing homes and urban schools.

There are many potential uses for Talk2Me, and the market has shown an interest in similar products. COPE Today, which focuses on treating veterans with post-traumatic stress disorder, was acquired for $30 million. Talkspace, an online counseling platform similar to Talk2Me, has received $3.5 million in funding. Nolte has watched Talkspace’s forum user base grow by 40 percent in the past six months, from 55,000 to 77,000 users posting up to 1.5 million posts, with which the forum’s licensed caregivers interact, Facebook-style.

Nolte hopes for similar growth and adoption to his platform. Talk2Me is rolling out on a limited basis to local users in the coming months. Four counselors have signed up, and Nolte has received requests from other therapists interested in joining. He hopes to grow his roster of therapists to 30 or 40 to achieve a sustainable balance. From there, it’s on to establishing Talk2Me as a tool for educators.

With any luck, people in telehealth circles – and venture capitalists, too – will be talking up Talk2Me very soon.