The Past and Present Collide in KC Developer’s Historic App 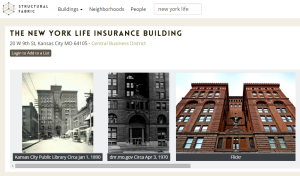 Kansas City’s “first skyscraper” was built in 1888 for a million dollars. The 12-story brownstone New York Life building today overlooks Baltimore St. between 9th and 10th streets downtown — a path well worn by the sneakers of schoolchildren on field trips to the nearby public library.

Though hardly towering by today’s standards, the building nonetheless boasts a Renaissance Revival style unrivaled by any other buildings in the city, not to mention one intrepid-looking bronze eagle above the entrance.

It is precisely the kind of landmark Structural Fabric was created to celebrate.

The brainchild of designer, video game junkie, and urban planning buff Corey Light, Structural Fabric is an app that allows people to explore the built environment around them, learning the stories behind buildings old and new, and sharing their own details about their favorite landmarks.

Light presented his app at two recent KC Digital Drive-sponsored events: the Civic Apps Showcase on Feb. 23 (video), and a recent “Learn Night” of the Code for KC Brigade.

The app is an impressive passion project from a coder looking to give back.

As a design and art student at UMKC, Light was given a Trustees Scholarship – a generous break that came with an obligation to return the favor to the city.

“I took that very seriously,” Light says. “I feel that as a developer, it’s my duty to help a city that’s starting to become fully formed as a tech-centered city.”

The notion of a city taking shape through technology is a good analogy for what it’s like to explore Structural Fabric. Geolocation functionality allows the user to find nearby structures and begin diving into the photos (both historic and crowdsourced), historical data, and rich cross-references that surround them, literally and figuratively.

Unlike, say, Wikipedia, which is more two-dimensional index of information, Structural Fabric is a discovery platform that invites surprises and participation.

“I want people to enjoy looking at history from a connected perspective,” Light says.

In addition to allowing users to upload their own photos and create or edit entries, Structural Fabric draws data from a wide array of sources local and worldwide. The list includes KCMO’s open data platform, Wikipedia, the Missouri Valley Collections at the Kansas City Public Library, Flickr, and a wealth of lesser-known neighborhood associations and historical societies whose pages Light regularly scrapes for architectural nuggets. 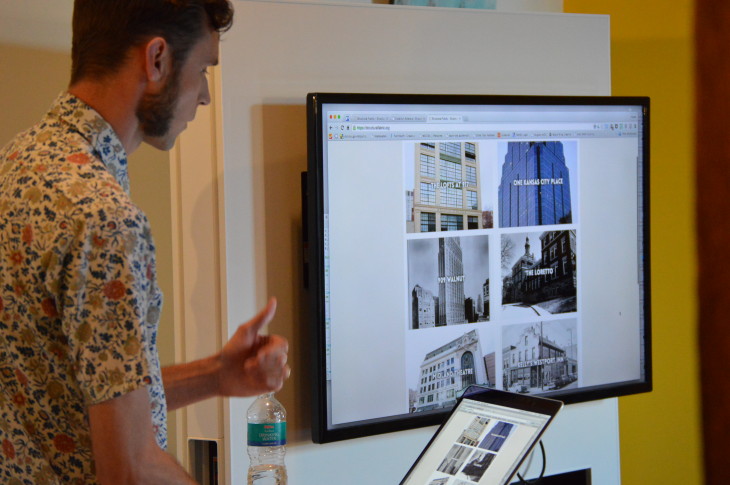 Light envisions his app not only as a treasure trove for urban wanderers, but also as a useful tool for professional builders. Architects can use it to gain an overview of a city, uncover historical details, and evenshowcase their own work. Urban planners can use it to view a city from a high level and identify problematic areas, such as aging neighborhoods at risk of infrastructure problems.

Though it only exists now to showcase Kansas City, Light sees Structural Fabric as a resource that could take off in other cities. In the meantime, KC will serve as a proving ground while Light adds new features and explores different ways to integrate data.

“There’s nothing to stop the spread of it,” says Light.

Users are encouraged to help it spread by going to StructuralFabric.org and looking for – or adding – their favorite local places.