Highlights from GigHacks 2015: Shinra, Virtual Reality, and Rethinking the News 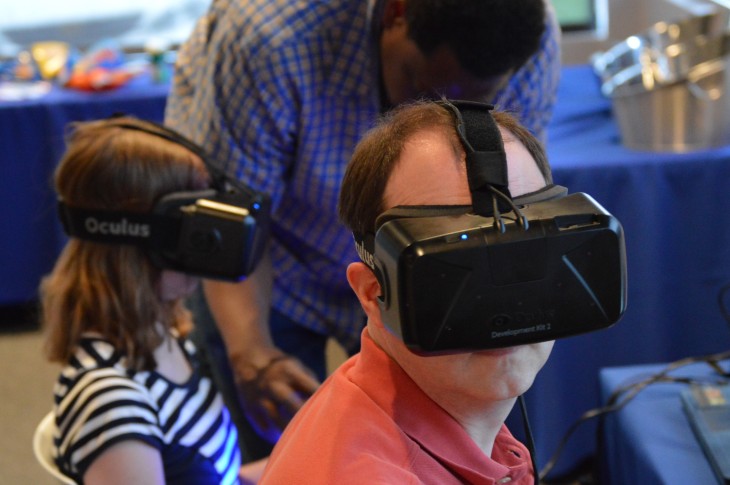 Imagine being able to take a full, 360-degree, spherical, panoramic picture of the room you’re in right now, from the stack of papers on your desk, to the walls on either side of you, to the wastebasket in the corner overspilling with to-go coffee cups, the dusty ceiling fan overhead, and that pile of O’Reilly books you’ve been meaning to read on the floor by your closet.

Now imagine being able to stream that image across the world to a friend who can load it on her smartphone, slip it into a Google Cardboard, and look around your room in realtime.

And while beaming your office is pretty cool, what if you could move the camera inside a warzone, a rock concert, Times Square on New Year’s Eve, or an Alaskan tundra under the aurora borealis?

This glimpse into the very-near future of accessible, affordable, high-quality virtual reality was one of the highlights of this past weekend’s GigHacks event at the Google Fiber Space in Kansas City. Held concurrently in San Francisco (CA), Burlington (VT), Chattanooga (TN) and Charlotte (NC), the three-day hackathon brought together gigabit-obsessed techies to push forward projects that use 1Gbps fiber-optic connections to produce new media experiences, move massive amounts of data, and create new business opportunities. 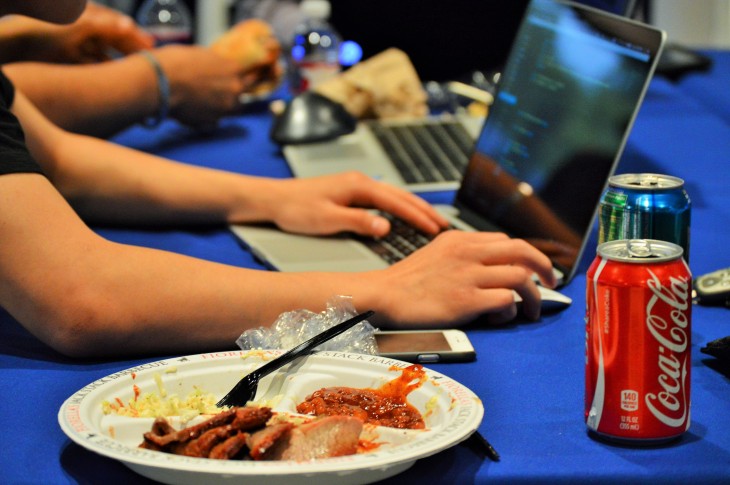 GigHacks was co-organized by KC Digital Drive, US Ignite, Orange Silicon Valley,  Mozilla, Burlington Telecom and the Chattanooga Public Library. Locally, it was sponsored by Google Fiber, Shinra and TechWeek. It was the third in a series of gigabit hackathons inspired by the arrival of gigabit fiber in Kansas City. The first two, Hacking the Gigabit City and Gigabit Explorers, were held in KC and led to the launch of a few apps that are on the market today.

GigHacks was the first to join together gigabit developer communities in five cities. In addition to hacking on their projects at home, participants spent the weekend chatting and collaborating in realtime over BEAM and Kubi telepresence robots, Google Hangouts, and plain-old email and texts.

Here are some highlights…

Shinra and the Future of Cloud Gaming 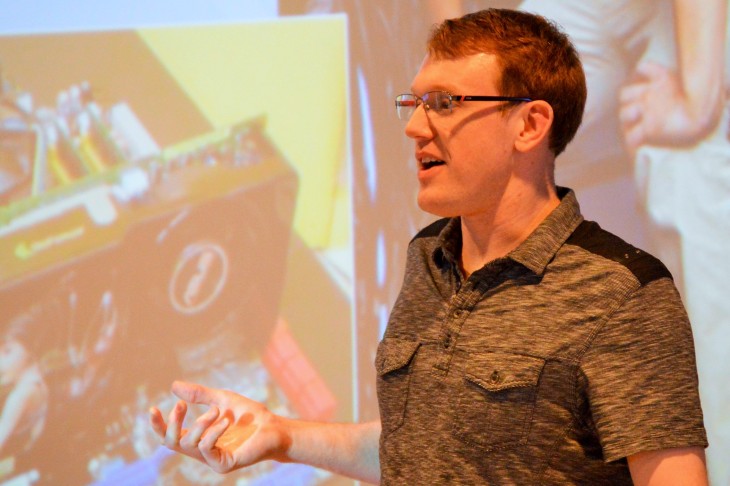 Colin Williamson of Shinra talked about the streaming future of gaming.

Colin Williamson, director of partnerships at Shinra, gave a special presentation at the GigHacks location in KC before a crowd of gamers excited by the potentials of Shinra’s streaming service to deliver supercomputer-powered video game experiences to users at home.

In addition to speaking at and sponsoring GigHacks, Shinra made a splash in the gaming world earlier this year when the Japanese-born, NYC-based company unveiled its fiber-focused cloud service at the Austin Google Fiber Space at SXSW. The impressive demo game shows a dragon flying through a 20-mile game landscape rippling with one million individually rendered trees, fluid dynamics that allow for realistic waves and ripples on the surface of a lake, dozens of AIs (independently acting “enemies”), and other mindblowing features that bring multiplayer gaming a step closer to the real world.

As Colin explained, with Shinra, “each player opens a facetime window into the same world.” The platform’s 1:N architecture allows a single supercomputer to conduct all calculations needed for a single game experience shared by multiple players. And then there’s speed. The remote supercomputing combined with low-latency fiber optics means never having to wait on a load screen again. “You can fly as fast as you want across the world without the game having to catch up,” Colin said.

This seamless, blazing-fast experience will be available exclusively for Kansas City Google Fiber customers to beta test in the summer of 2015. Sign up to get a reminder when the beta launches. 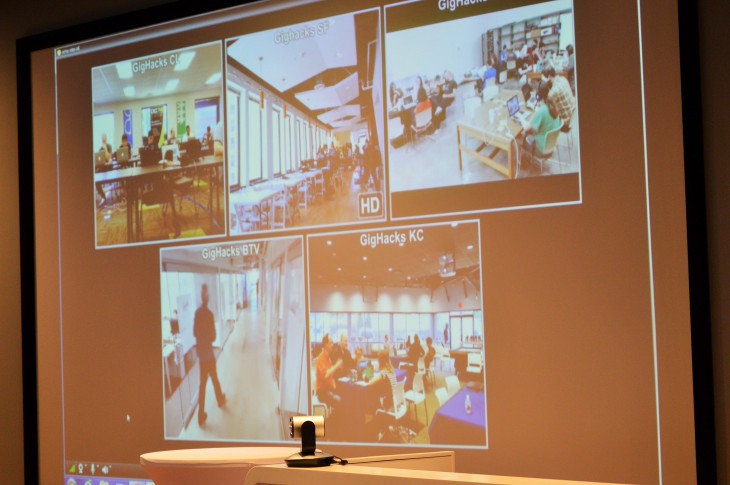 Participants from all cities had a window into each other’s hackathon.

In the works for a while, KC Digital Drive officially launched our Gigabit City Lab program at GigHacks. Gigabit City Lab is a beta tester program we’re building to assemble a group of people with gigabit fiber connections at home and an interest in being the first to try out brand-new apps like Shinra that leverage fiber broadband.

As these new apps and products are developed in the gigabit marketplace, we will be sending Gigabit City Lab members exclusive invitations to test them and give feedback that will inform their development.

It’s a unique opportunity to take part in the frontline of gigabit app development, and anyone is welcome to join. If you would like to be a part of the test network – it’s free, and it only takes a 1Gbps home connection – apply here.

In KC, we had good participation from the following folks all weekend: 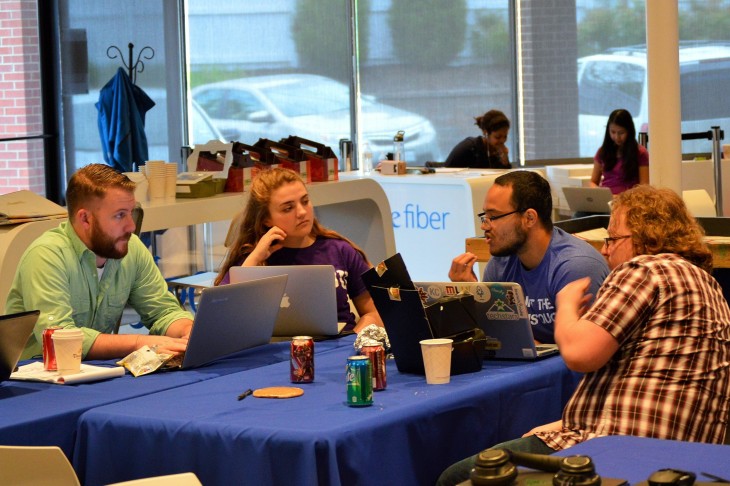 Team Bopp worked on their app for civic engagement. 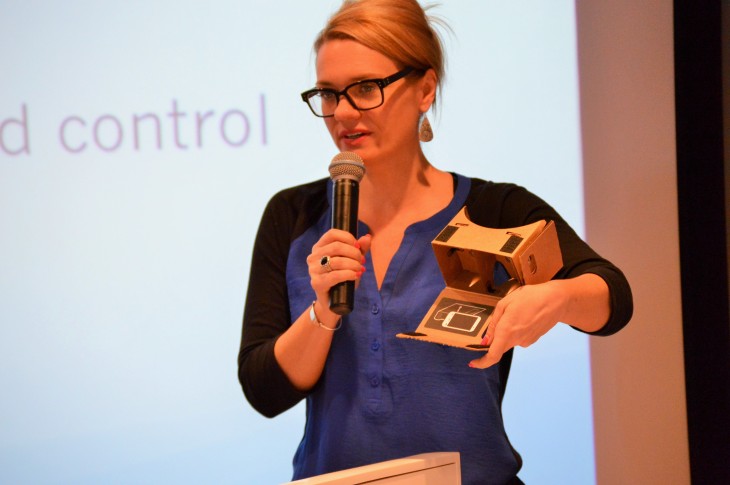 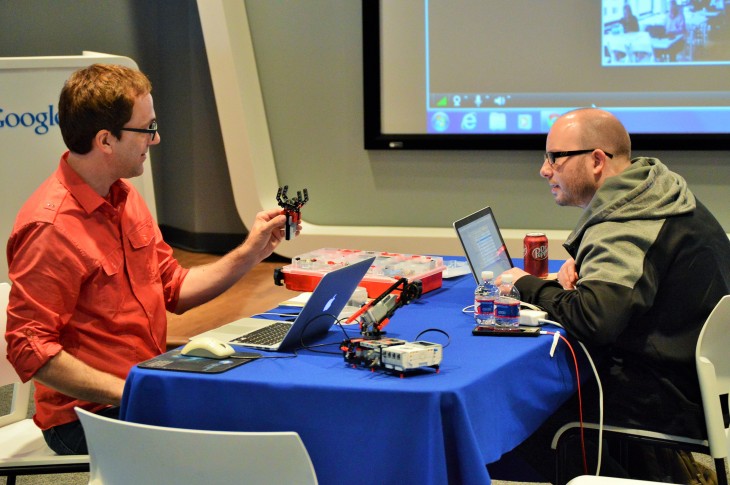 Curious about what happened across all GigHacks cities? Download the official GigHacks Recap (PDF) from Orange.