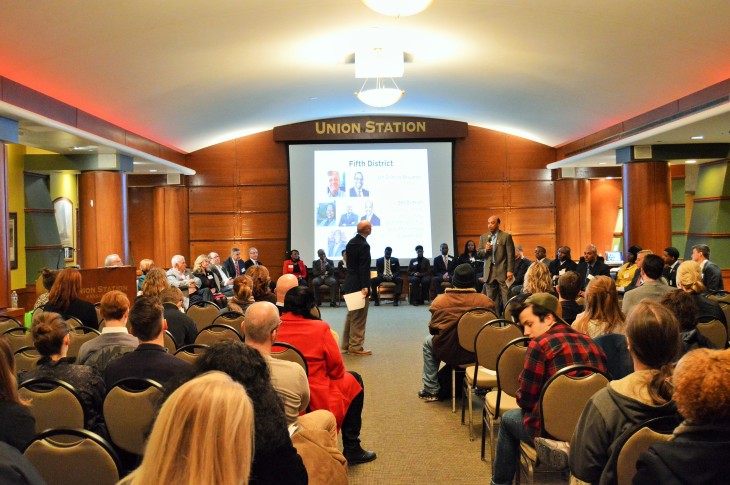 This past Monday night in a conference room at Union Station, 29 council candidates across the six districts of Kanas City, Missouri, sat across from a packed room of 60 concerned, tech-savvy citizens. An air of civic engagement and open dialogue prevailed as the well-groomed incumbents and hopefuls took turns fielding questions about technology from local public television provocateur Nick Haines.

The event was KC Digital Drive’s first ever Civic Tech Forum. Co-organized with our local Code for America Brigade, Code for KC, the chat with the KCMO politicos was the first half of a two-part program. The second half featured a Civic Apps Showcase of ten lightning talks from makers and startups with apps designed to make government and public services run smoother.

Both were held in conjunction with Code for America’s national Code Across celebration, series of events aimed at bringing together civic leaders and technology advocates. And by all accounts, the #CivicTechKC event fit that connective bill. It united two sides of a community where the digital divide is present not only at a neighborhood level but also between City Hall and the community it serves.

What Is KC’s Tech Future?

Kansas City is on the rise as a technology center, and KCMO city government has shown great vision in embracing new technology for public benefit. Mayor Sly James’ team has championed broadband adoption for community benefit through initiatives held in KC Digital Drive’s digital Playbook, and the City has expanded that view in the recently released Digital Roadmap. But despite those giant steps from the Mayor’s office, it’s not always clear whether the folks on the 26th floor of City Hall are engaged with the digital class.

Under the skillful, fast-paced questioning of Mr. Haines, it became clear that while just about all 29 council candidates in attendance agreed that technology innovation is reshaping the city and the culture at City Hall needs to adapt with the times, the candidates had differing opinions as to the challenges of managing it.

Here are a few stand-out moments (and a District Map for reference):

DIGITAL DIVIDE: How do we get all citizens connected to the Internet via the fiber-optic broadband available in our city?

Third district candidate Jamekia Kendrix, who participated in the grassroots Paint the Town Green initiative during the Google Fiber rally period of 2012, noted that having access is simply not enough. Many neighborhoods on the lower-income east side of Kansas City within the Google Fiber footprint qualified for the service, but, Kendrix argued, further outreach is needed to teach people the value of getting an Internet connection in their homes.

While other candidates argued for public and public/private dollars to increase the number of hard connections – either to the home or to libraries and community centers in the district – Kendrix was the only candidate to advocate for continued education. This is an important part of the ongoing work of critical programs like the Digital Inclusion Coalition and Digital Inclusion Fund, which supports community nonprofits such as Connecting for Good and Trinity Community Church that provide digital skills training.

ECONOMIC/WORKFORCE DEVELOPMENT: How do we attract technology talent to the region and retain the talent we have?

Interesting responses to this came from the 5th District, where Cerner is planning to expand its Innovation campus – a project that will create 15,000 jobs. Whether those workers will come from KC or elsewhere, and where they will live, is a big question. Candidate Bilal Muhammad recognized the fact that there are more open IT jobs in the workforce than Kansas City has trained workers to fill them. Muhammad and fellow contender Lance Conley said the city needs to focus efforts at the K-12 level to produce high school graduates ready to move toward the tech careers opening in our market. Most candidates agreed that the school system is the first place to start when it comes to raising a trained workforce. 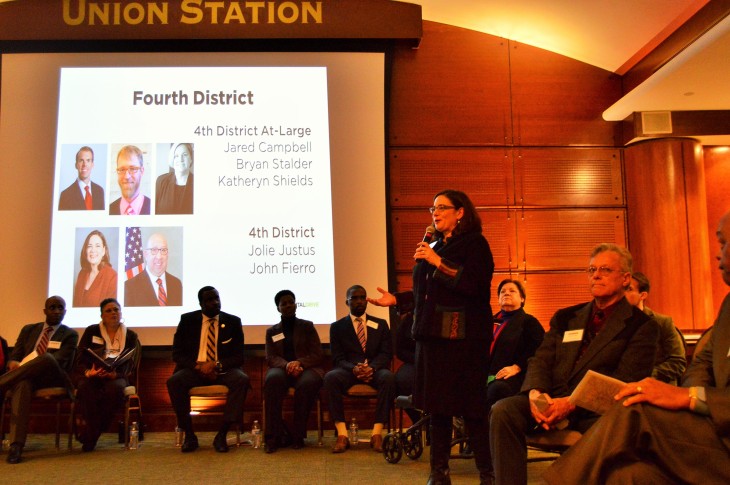 As for attracting talent to move here, candidates from the 4th District, which covers the millennial-friendly midtown-downtown area, pointed out that convincing young, talented people to move to Kansas City is a bigger challenge than just having open jobs.

Without providing specifics, 4th At-Large candidate Katheryn Shields voiced that KC “should do the exact opposite of what the Governor of Kansas just did” and cultivate a landscape of open and inclusive values. (Shields was presumbaly referring to Gov. Brownback’s rescinding of a 2007 executive order extending protected-class anti-discrimination status to gay and transgender state employees.)

Also in the 4th District, former Missouri State Senator Jolie Justus challenged private industry to be more aggressive in recruiting talent from the coasts. Among the selling points was the low cost of living in Kansas City.

Providing a 1st District (Northland) perspective, incumbent Scott Wagner chimed in noting that while our city’s much-celebrated startup scene is making progress, more effort is needed to attract investors to the region. Taking the Sprint Accelerator as an example, Wagner noted that many of the companies that have passed through the program have had to find investment dollars from outside of the area to survive.

Meanwhile, amid the robust discussion taking place on Twitter, a startupper issued his own challenge:

Moved to KC from Ky to work for Techstars for duration of the program. What’s your elevator pitch for me to make KC my home? #civictechkc

CITIZEN ENGAGEMENT: How can cities better use technology to meet people where they are? 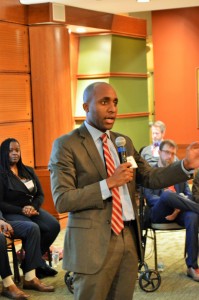 2nd District candidate Jay Hodges (who until recently served as a policy advisor to Mayor James) stepped up as cheerleader for the progress the city has made so far in embracing new technology. Among the accomplishments he extolled were the City’s launching of an open data portal, the hiring of a Chief Innovation Officer, and the development and execution of a Social Media Command Center to guide visitors around the city during the 2012 baseball All-Star game.

6th District contender Henry Klein called for the creation of a 311 app to allow citizens to report public works complaints via smartphone, as well as a voting app to address the issue of low voter turnout. (Incidentally, later that evening, Code for KC captain Paul Barham presented a status update on the 311 app the Brigade is building.)

Speaking of Code for America, 6th District-er Kevin McManus voiced a principle that sounded straight from the civic hacking textbook. When it comes to improving city processes, he said, the city should ask “how can we do the little things better and cheaper?” Dan Fowler of the 2nd District cited the city permitting process as a slow, paper-based system in need of technology enhancement, and Quinton Lucas of the 3rd District said that many services needing minor visits to city offices to conduct in-person business could be replaced with tech solutions.

Enhancement in areas of law enforcement were touted as positive by members of the traditionally high-crime 3rd District. “Everyone I’ve talked to in my neighborhood says ShotSpotter has reduced crime,” said sitting Councilman Jermaine Reed, referring to the realtime gunshot detection grid at work in the city. Rachel Riley, who lost her own son in a shooting, applauded the arrival of police cameras. Answering the question of privacy raised by cyber-monitoring solutions, Jamekia Kendrix again chimed in with words of wisdom regarding civic engagement: “technology should serve people, and the city must talk to people and find out their needs.”

On one final note, Alissia Canady, an attorney running for office in the 5th District, said she believes the EDC’s LaunchKC initiative is on the right track in contributing to awards of $50,000 for 10 startups that commit to building their businesses in Kansas City, especially when so many people in the city are unemployed. Ms. Canady argued for a “both/and” approach: a city that wants to build its workforce must invest in attracting outside talent to relocate, and it must provide resources to help local workers in need. 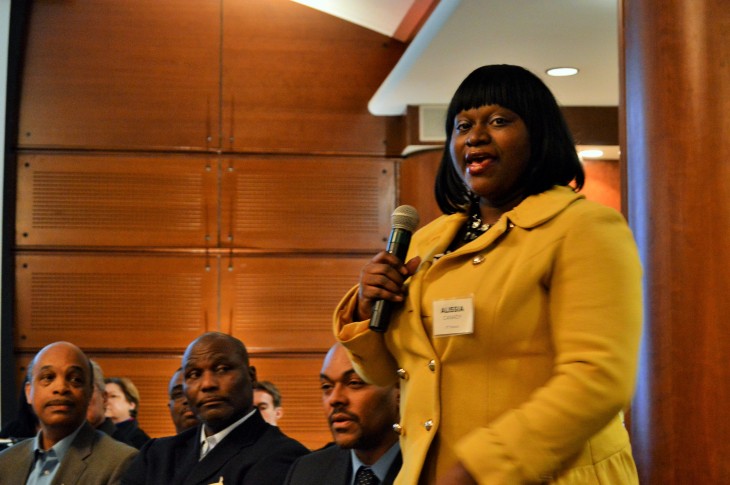 Conclusion: Government Needs to Be Smarter About Tech

Much more was covered in the hour-and-a-half forum than can fit in a single blog post. Parking problems, the regulatory challenges associated with sharing-economy enterprises like Uber and Lyft, giving grants to startups – these were a few of the other topics addressed.

But the one thing all candidates seemed to agree on was the need for civic leadership to work harder and faster in crafting policies and delivering services that stay abreast of changes in technology.

If you’d like to watch the entire Forum and Apps Showcase, it’s archived below, thanks to KC Digtial Drive partner Story Torch.

Responses by Candidates to the KC Digital Drive Pre-Event Questionnaire: