What to do with all that bandwidth? Look to our schools.

When Google Fiber announced it was coming to Kansas City, many began asking: Who could possibly need that much bandwidth? Now, just two years out, one man is answering: “It almost seems like you can’t have enough.” 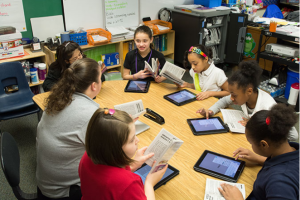 KCK students taking advantage of the gigabit. (Photo via kckps.org)

That’s Joe Fives, director of technology for Kansas City, Kansas, public schools. He talked to KCUR about the KCK system’s struggles to support its one-laptop-per-child program. In addition to those computers, kids also bring their own devices to schools. Now, Fives estimates that on any given day, 20,000 mobile devices are chewing up bandwidth.

“There’s just so much riding on the network,” he said.

Luckily, KCK has eight of its schools connected to Google Fiber, reducing strain on the school’s network and saving the district money. (It’s worth noting that as part of Google Fiber’s deal with the KC region, schools, libraries and other city-appointed public buildings would get free connections within neighborhoods that met the demand threshold. This put ample pressure on citizens to rally their neighbors — see Give Us a Gig.)

KCK is not alone in saving money while providing essential bandwidth. Evan Marwell, CEO of San Fransciso-based ed tech group EducationSuperHighway told KCUR that districts with sufficient broadband (we’re guessing in the form of community fiber access) pay one third of the cost that districts without ultrafast broadband pay.

That cost savings makes President Obama’s initiative to connect 90 percent of America’s schools to highspeed broadband in the next 5 years look a lot more attractive. Feasibility is another matter.

But as Debbie Smith, tech director at Missouri’s Fort Osage district pointed out, technology will become useless to students if there isn’t broadband to support it.

“If they can’t use it when they want to use it, they won’t. And teachers won’t use it either.”

Save money, keep up with demands in modern education. That’s what you do with that much bandwidth.

END_OF_DOCUMENT_TOKEN_TO_BE_REPLACED

“I love being part of groundbreaking work that will make a sustainable difference in peoples’ lives for generations to come.”