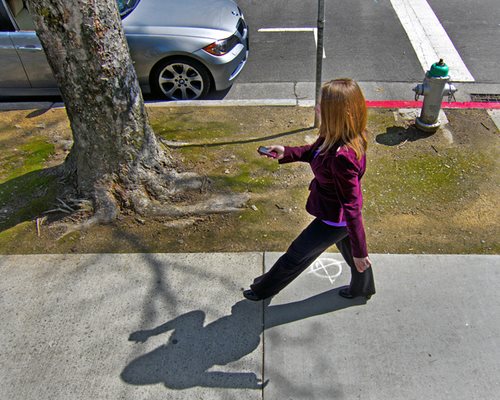 If you’re in the habit of texting while walking, a new app in development at the University of Missouri Kansas City could save your life.

Currently in testing phase at the UMKC School of Computing & Engineering, WiFi-Honk! harnesses your smartphone’s constant seeking of wi-fi networks to alert you when another device is on a collision course.

This innovative app comes at a crucial time. An Ohio State University study found that injuries related to pedestrian cell phone use tripled between 2004 and 2010. As for using your smartphone behind the wheel, well, we already know that’s a major problem. WiFi-Honk could address both.

Though apps and systems that would get cars talking to each other (either via Car-to-Car or Car-to-Infrastructure communications) are not new, looping in pedestrian use of smartphones had not been part of the equation. Wifi-Honk aims to change that, and its potential to reach even beyond the crosswalk are huge.

As Sejun Song, the UMKC computer scientist who originated the app, tells IEEE Spectrum, “If car manufacturers put this Wi-Fi inside their car, then the warning system becomes ubiquitous. There can be a smooth communication between cars or between car and person.”

Read more at the Smart Cities Council, and check out WiFi-Honk’s demo reel, which won Best Video at the MobiSys 2014 conference.