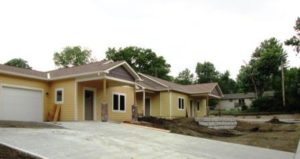 Currently, the number of people worldwide 65 years and older is estimated at 506 million, according to information shared by Greg Corpier, principal/vice president of technology solutions and strategy, Telecare Global, LLC. This number is expected to surge to 1.3 billion by 2040. And within just one decade, there will be more people 65 years and older than children under the age of 5—for the first time in human history.

There’s no doubt that the time for improved elderly care, including aging in place, is now. And with the opening of Cedarwood Senior Cottages in Lawrence, Kan., residents benefit from state-of-the-art technology to help them accomplish one key goal: live independently as long as possible.

Technology in Action: A Closer Look at Cedarwood Senior Cottages

A partnership between the Lawrence Community Housing Trust (LCHT) and Telecare Global, Cedarwood Senior Cottages recently opened the first of 10 units and is now home to eight residents.

The LCHT describes Cedarwood as “the first tenants to homeowners rental project designed to address the fastest growing adult population—seniors aged 62 or older.”

The homes are outfitted with a wide variety of devices, including motion sensors, beacons and the resident’s choice of one of three wearables, as well as Amazon Echo and Dot technology to create a voice interface. As a result, no major learning pattern is required to interact with the system, meaning residents can quickly adapt to the technology-enhanced surroundings.

Telecare Global has united these devices into a system that “creates a virtual model of the environment from which it can make decisions and track patterns,” the capabilities of which Corpier detailed during a recent presentation to the KC Digital Drive Health Innovation Team

That sort of tracking not only helps with things like fall prevention and ensuring medications have been taken, but can also result in early detection of health issues. During his presentation, Corpier shared an example of urinary tract infections that had been diagnosed more than a week before they might have been detected by a clinic based on a person’s movement, bathroom usage patterns and other data.

The early detection of a health issue underscores the larger benefits of Cedarwood’s technology. As Corpier says, the approach to this particular aging in place project “goes beyond the gee whizzery” of the gadgets to not only provide real-time data about a resident, but also learn to anticipate user needs and wishes. That data is also virtually modeled to track patterns, tapping into the power of predictive analytics to anticipate (and minimize) potential issues or challenges.

Although Cedarwood Senior Cottages have just opened, the project has long been in the works. Corpier says it took nearly 15 years to bring the first full site to fruition. And while demand for this type of housing will likely increase, Corpier says expansion of these homes will be thoughtfully planned to ensure optimal performance and data analysis.

Telecare Global’s research that’s now being put into practical application at Cedarwood will also soon benefit residents who don’t necessarily want to leave their homes. Technology like motion sensors and beacons, among other devices, will be added to stand-alone homes, equipping residents with the tools and insight that can not only help defeat aging in place challenges like isolation, but also help them live independently for a longer period of time than might previously have been possible.

It’s hard to imagine that aging in place technology is still in its early stages, yet Corpier says, “we’re where telehealth was 10 to 15 years ago.” The possibilities of what’s ahead are downright exhilarating, and we’ll be keeping an eye not just on the Cedarwood Senior Cottages, but also other Telecare Global projects as the company makes significant strides toward creating a technology-enabled transformation of senior living.

END_OF_DOCUMENT_TOKEN_TO_BE_REPLACED

Founded in 1967 in Norton, Kansas, Valley Hope operates 16 treatment centers in seven states across the Midwest and has helped thousands of people find recovery from addiction to alcohol or drugs. Valley Hope’s Tele-Behavioral Health Program has almost 200 patients currently treated online and has serviced thousands of others since its creation in 2007. […]