A newcomer to Kansas City’s Crossroads is not only bringing more tech jobs to town – it’s showing a glimpse into what offices of the future could look like. 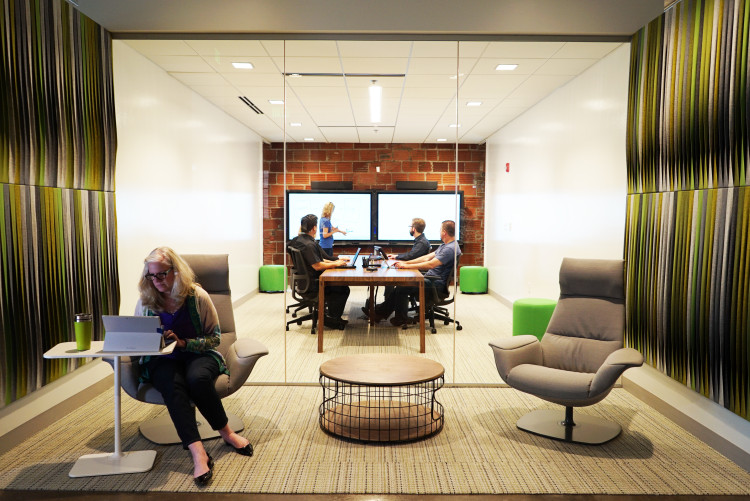 Valorem Consulting Group LLC is an IT consulting firm that focuses on Microsoft products and cloud-based services. Founded just six years ago by area natives Domnick Parretta and Justin Jackson (of KC and St. Louis, respectively) the company has grown extremely fast – and shows no signs of slowing.

According to a recent Star business page story, the company has doubled its client base from 60 to 115 in the past year. The clients are big-name enterprise users of Microsoft cloud-based tools such as Office 365 and Yammer. Clients on the company website’s impressive logo wall include Post Foods, DuPont, Alaska Airlines, and Hertz as well as local familiars Lockton, HNTB, and Husch Blackwell. Valorem has offices in KC, St. Louis and Seattle and according to the Star, “plans to establish locations in Chicago and Dallas, and eventually set up in Europe, south Asia or South America.”

The company is also growing exponentially in terms hiring. In four years, Valorem’s workforce has grown from 20 to 120, and it plans to hire another 30 employees by the end of the year. (Don’t take your eyes off the full-stack developer in the cubicle across from yours.)

“We put everyone in recruit mode, which reaches way out past our walls here,” says Allison Jensen, Valorem marketing director, over the phone from the company’s Crossroads office.

And while attracting and retaining tech talent to the KC region is a huge priority at KC Digital Drive, we also applaud Valorem’s excellent taste in totally rad intra-office technology.

Jensen and her associate, Sarah Beasley, speak rapturously of Valorem’s state-of-the-art conferencing tech. Enabled by symmetric gigabit from Google Fiber, Valorem’s Skype for Business setup combines videoconferencing and screensharing, creating what Beasley calls a “social environment” between workers or clients who are in the office and those who are remoting in.

One of the killer apps of the gigabit age is the lifelike presence that tools like large-scale Skype afford. In turning ear-straining conference calls into interactive human experiences, such systems change the way people work and collaborate across distance. For a company growing as ambitiously as Valorem, that’s huge.

“Everything we do is in the cloud. Everything,” Jensen says. “Speed matters here.”

END_OF_DOCUMENT_TOKEN_TO_BE_REPLACED

Learn about all the speakers from Compute Midwest — and check out their at-bat anthems.