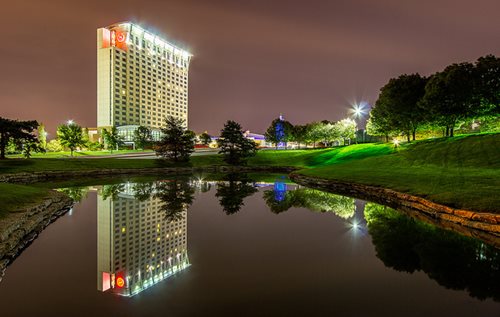 Yesterday, the Kansas City Business Journal reported that on Monday, August 4, the Overland Park City Council unanimously voted to approve AT&T to bring its 1 Gbps GigaPower network to the KC suburb. No word yet on when the service will be deployed, but the Business Journal notes that it only took AT&T eight months from the time of its announcement to set up GigaPower in Austin.

This news comes just three weeks after Overland Park voted to allow Google Fiber to extend to the area. With gigabit speeds comparable to Google, the Business Journal predicts a “fiber-optic feud” between the two carriers.

Many in the area are looking forward to the competitive climate, as it gives consumers a choice.

KCnext President Ryan Weber stresses that having a choice between gigabit providers is a boon to economic development, especially among tech companies considering relocation to Kansas City.

“[Tech companies] want to make sure there are a number of carriers,” Weber told the Business Journal, “because for some tech companies, they have two carriers coming into their office.”

Attracting new tech companies to Kansas City was a high civic priority according to the attendees of the recent KC Region Gigabit City Summit organized by KC Digital Drive.

With Johnson County back in line for Google Fiber and AT&T’s GigaPower potentially expanding from OP to other areas of the metro, we’re thinking Kansas City will be hard for tech companies not to consider.

KC Digital Drive announced its first cohort of micro-grant recipients for “KC Goes Tech,” a new program that helps community organizations teach digital skills, such as how to use email and stay safe online, and it connects participants to funding for home internet and a computer they can take home after completing 15 hours of training.

END_OF_DOCUMENT_TOKEN_TO_BE_REPLACED

Founded in 2002, Healing House is Missouri’s largest provider of substance use recovery housing. In its twenty years of operation, it has served over 1,100 individuals by providing transitional housing, substance abuse recovery programming, and job search assistance. Healing House manages sixteen properties spread across northeast Kansas City, and on any given day almost 200 […]

END_OF_DOCUMENT_TOKEN_TO_BE_REPLACED

The Enterprise Center is a peer organization of KC Digital Drive that manages a range of digital inclusion programs aimed at improving connectivity and access to digital technologies in Chattanooga, Tennessee. Three of the most important are the Quick Connect and HCS EdConnect programs, which helped Chattanooga residents stay connected during the COVID-19 pandemic, and […]