Fireworks in October – even beyond baseball.

If KC Digital Drive’s Health Innovation Team were to compile an FAQ, surely one issue would rise immediately to the top: Why isn’t there better information sharing among health care providers in the Kansas City area, and what can be done about it on behalf of the consumers they serve and the local health “ecosystem” overall? 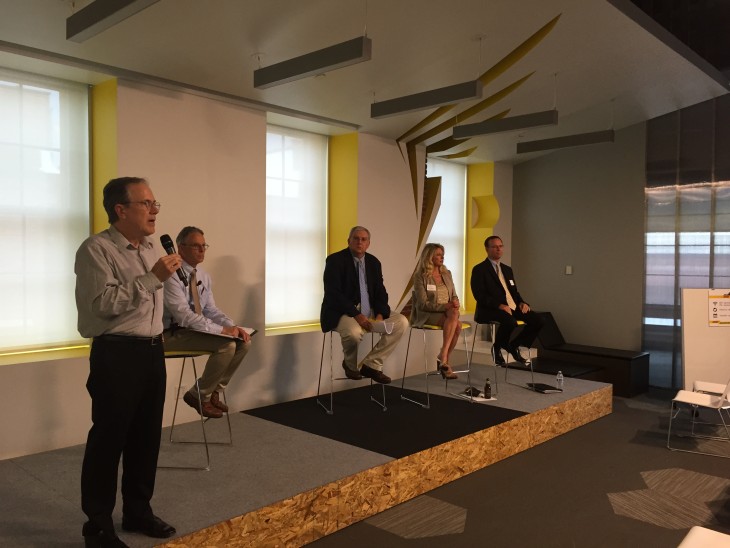 The health information exchanges (HIEs) which these HIOs operate have been expected to be the primary medium for sharing information securely and appropriately across health care systems and providers. We wanted to know: How do these leaders see the current state of affairs? What challenges do they encounter? What are the prospects for better sharing between them and for the area overall? In what directions are their current experiences and vision leading them? Answers to such questions have not been evident even to some of the key health care stakeholders in the area, much less to the area residents these stakeholders serve.

In the ensuing discussion, which climaxed at the October 6 forum, we found that contention and a certain amount of dysfunction clearly still exist, but we also found reasons for hope.

Regarding contention and dysfunction, we received some validation of our concerns while planning for this forum when the Kansas City Star published an article citing many of the same issues. The Star found cases, for instance, where patients moved between different health care providers, all of which were using electronic health records, but the lack of connectivity between them forced these providers to print out the electronic data, fax it to the other provider, only to have that provider scan the document into their own electronic record. Such scans make the document visible within the record and available to the practitioner, but often do not have the capability to capture the data contents in ways that are usable by the receiving system for tracking and analysis, decision support, or research. This lack of usability is to the detriment of the practitioner, the patient and, ultimately, the population.

As revealed in a later conversation with Pasquale, one of the items that we did not discuss in detail at the event was the use of Direct (secure) messaging to address the issue of manually scanning and faxing medical records between EMRs.  Per Meaningful Use Stage 1 – 3 requirements, health systems are required to transmit a certain percentage of transition of care documents using an approved method.  Direct Messaging is the most utilized medium to accomplish this requirement.  In fact, most EMRs can now consume portions of these records directly into their matched patient chart.  This alignment can include Problems, Medications, Allergies and Immunizations.  Most EMRs also allow for the attachment of the transition of care document directly to the patient chart for clinical review.  The use of Direct messaging can greatly reduce the amount of manual work that used to be required to send patient information between medical providers.

In any case, the ability of systems to “talk to each other” is often viewed as a technical challenge, and collaborative groups such as Commonwell and Carequality have been formed, primarily by systems vendors, to address this. Even with such efforts, HIEs have been viewed as necessary for the foreseeable future for reasons including the fact that they already are becoming embedded in the environment, as well as the expectation that they can continue to play the role of trusted third-parties. But there are business challenges, as well, to the smooth exchange of information, and that concern is raised frequently in a metro area served by three different exchanges.

Because such communication challenges in our area are often ascribed to disparate and sometime competitive business models between the HIOs, John Carney asked the panelists to speak first about the formation and business model of their respective organizations.

In terms of day-to-day operations, the descriptions offered by the three HIOs were very similar. All are set up a-s free-standing, not-for-profit entities with scaled fee structures for the provider organizations that participate in the exchange. The greatest differences appeared to the ways in which the organizations were initially formed and in their approaches to retention of data within the exchange.

All 3 exchanges connect to other exchanges and external networks, and KHIN and MHC will begin communicating with each other soon over the connection they have established through the national eHealth Exchange managed by the Sequoia Project.

The greatest divergence appears to be between LACIE and MHC, and it relates to differing views on “rules of the road” for connecting to other exchanges. Pasquale was explicit in covering 3 fundamental aspects:

It seems that the latter is the real sticking point, and for a moment the air in the room at the Accelerator seemed to heat up as Pasquale and Dittemore went head to head. Dittemore argued that LACIE’s technology partner, Cerner, is a member of Carequality, which is part of the Sequoia project, so data integrity and security standards should not have to stand in the way, and KHIN, already cooperating with LACIE, seems not to have been bothered with MHC’s RHIO agreement.

Pasquale’s follow-up comments appeared to bear this out:  He focused on fees and indicated disagreement with the idea that free connections to MHC from other exchanges is unfair to MHC members and that the fee level he has been quoted could be considered amicable. Dittemore asserted that the original quotation was higher than LACIE’s annual revenues at the time.  Pasquale responded that in the 18 months that he has been CEO of MHC, he has not discussed fees amounts with LACIE.

While there clearly are still business challenges between HIOs which need to be addressed before providers and consumers can expect a seamless flow of information, McCrary also stressed on-going obstacles over which the HIOs have little or no control. In particular, the lack of compliance to established data sharing standards by many suppliers of electronic health record systems and the fact that there are still methods used by provider and supplier organizations that can be considered as “health information blocking”, including avoidance of participation. In the former case, absent or improperly formatted data is difficult to reconcile and is typically just rejected by receiving systems. This flies in the face of Meaningful Use. In the latter case, the biggest challenge to the seamless flow of information in the Kansas City area may actually be that the largest provider organization in the area, HCA Midwest, has opted not to connect any of its Missouri hospitals to exchanges.

Though acknowledging that there are significant business matters still to be worked out between exchanges, the panelists left the audience with a call to action to focus on urging participation in exchanges and fighting any tendencies toward information blocking and non-compliance with data sharing standards. All panelists emphasized in on-stage and off-stage conversations the degree of focus which the Office of the National Coordinator for Health Information Technology has placed on this in its reports to Congress, and McCrary mentioned in a related conversation that Kansas Senator Pat Roberts has taken up the charge as a member of the Senate Committee on Health, Education, Labor, and Pensions.

By the end of the meeting, an optimistic tone emerged. All three representatives confirmed that the increasing demand by private providers to directly exchange patient information from each other as they follow, care for and transition patients in and outside their respective provider systems of care will continue to escalate. That may help reshape the competitive issues in a direction that amplifies patient-centered outcomes. Attention by the HIEs on how they can accelerate and facilitate that process in more seamless ways may help alleviate some of the stresses associated with structural competitive issues, while appropriately amplifying the direct benefits to patient and providers. That’s a good outcome for everyone; helping to deliver on the original promise of establishing HIEs and the goal of better care and a more engaged patient.