For the past year, Kansas City’s business and community leaders have been enthusiastic in collaborating with each other to imagine ways Google Fiber can benefit the city. But one big question that’s rarely been addressed is, “What can we learn from other cities around the world?” 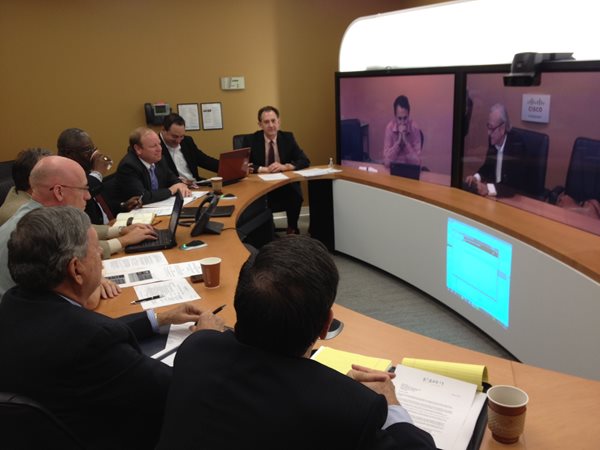 Local broadband talk went global this past Wednesday, June 27, early in the morning at the local Cisco headquarters. Gathering in a state-of-the-art TelePresence room, city leaders from both sides of the state line joined a cadre of local and international strategists and smart city experts in discussing ways cities can become smarter by learning from each other.

Wednesday’s inaugural Gigabit City Summit was the first in a 12-part monthly series of teleconferences that will address how high-speed broadband can be harnessed to improve areas of civic life, including education, social justice, digital inclusion, urban innovation, workplace development, healthcare, entrepreneurship, and more.

What Is the Gigabit City Summit?

The Summit was developed by KC gigabit champions Aaron Deacon of Curiolab and Mike Brown and his colleagues at The Brainzooming Group (who led the Building the Gigabit City sessions last year), along with St. Louis-based smart city planner Dave Sandel of Sandel & Associates.

Described as a “global dialog on smart and connected cities,” the Summit series aims to provide a platform for peer cities to exchange ideas and share critical factors in successful adoption and use of high-speed broadband.

Wednesday’s session brought out a full house: Along with the trio of planners (Deacon, Brown and Barrett Sydnor of Brainzooming, and Sandel); KCMO and KCK Mayors Sly James and Joe Reardon, along with Mike Burke and Ray Daniels of the Mayors’ Bistate Innovation Team, participated in a facilitated discussion centered around a presentation by Tim Campbell (via teleconference from Amsterdam). Campbell, who also had a hand in planning the Summit, is the author of the book Beyond Smart Cities, a study of how cities thrive by building relationships with each other across international lines.

In researching his book, Campbell asked leaders in 53 cities around the world to discuss where they get their new ideas. In addition to the all-important act of sending delegates to visit other cities (notable example: Seattle, which has sent 100 business and civic leaders to a foreign city every year since 1993), Campbell found that the smartest cities tend to do the following:

*   Formalize their search for knowledge by making it regular, continuous, and strategic, with an eye toward diversity and inclusiveness (e.g. Seattle).
*   Develop a “tissue of remembering” in the form of databases, documentation, websites, and other repositories where knowledge can be stored.
*   Form “clouds of trust” by making that knowledge public and building networks that include the city’s “hidden leaders” (Campbell cited MBIT’s Google Fiber Playbook as a great example).

Those are just a few of the highlights. Be sure to check back for a more in-depth content recap.

The Takeaway: Collaborators Without Borders

The broadest and most compelling thing that emerged at the Summit, however, was the idea that to truly innovate, cities must emphasize person-to-person interaction over technological thinking. As Sandel put it, “A successful Gigabit City is 90 percent sociology and 10 percent infrastructure.”

In other words, while coming up with cool new apps for broadband-empowered technology is important (who wouldn’t want a virtual 3D doctor and your beck and call?), the first step is to encourage dialog and collaboration between visionaries,  decision makers, and other smart city stakeholders. And that dialog must take place across borders, whether that’s a state line (KS/MO) or a continent.

As Mayor James said: “The first innovative thing we’ve done in government was to work together.”