How Libraries Can Matter in an Age of Google: John Palfrey at the Kansas City Public Library 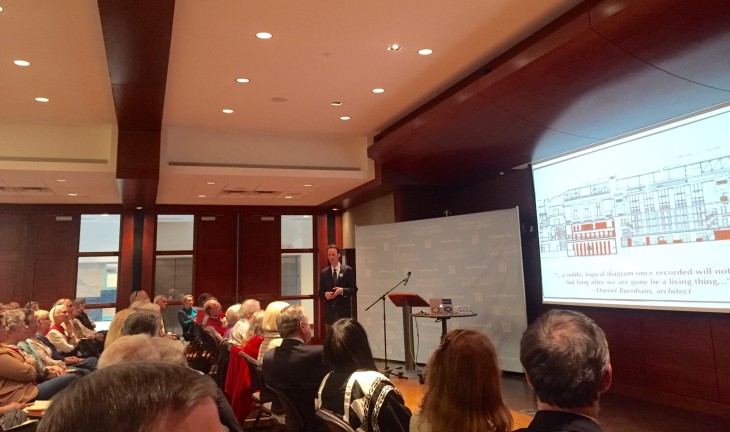 To people of a certain age, the act of extending your arm to reach for a book on a shelf, pluck it from between other titles all vying for your attention, and turn it in your hands amid the stacks of a really great library is a deeply nostalgic enterprise.

And in recent years, it’s an act that’s dying out.

As vice-dean of library and information services at the Harvard Law School’s library between 2008-12, John Palfrey never saw a single student complete that arc of reaching for a book and taking it off a shelf.  Instead he saw students tote in their laptops and lattes, pop in their earbuds, and lose themselves in the blue glow of digital.

This past Wednesday at the Kansas City Public Library, Palfrey talked about the painful but hopeful digital evolution of libraries. The former law professor outlines the struggle in his new book, Biblio TECH: Why Libraries Matter More Than Ever in an Age of Google. (It comes out May 5; look for it here.)

Palfrey is also founding chairman of the Digital Public Library of America, an ocean-sized repository of digitized historic texts, interactive exhibits, and APIs developers can use to create their own apps.

You won’t find the latest John Grisham novel in DPLA. But you will find “Letters and memorials of an East Tennessee Union soldier, in behalf of his long suffering and oppressed countrymen, under rebel anarchy in 1861-2-3-4- still in the midst of war, desolation, and wide-spread famine” by Peter H. Grisham. The 1864 account by a self-described “humble Union soldier” is typical of the obscure historic and public domain works you are likely to find quick-searching the collection.

Before a packed fifth-floor auditorium at the Central Library, Palfrey talked about his and the DPLA’s efforts to reconcile the digital disruption with the importance of free public libraries to the country’s future. Libraries and librarians, Palfrey argues, have always been the guardians of the nation’s knowledge, and they should continue that role in the digital age. To do so, they must convey that they are so much more than just a lesser Amazon or Google alternative.

To bring that library experience to life online, the DPLA is attempting to create a “human-centric” user experience that captures the magic of wandering through the stacks and stumbling on a life-altering book. One of the DPLA’s apps, Serendip-o-matic, lets you copy and paste song lyrics, text from a paper you’ve written, or random interests into a box and spits back recommendations from the library’s collection.

Even with the best-intended third party apps, however, libraries aren’t going to UX or SEO their way out of their digital deficit. Innovation is expensive. Though catalog software companies like Bibliocommons are coming close to delivering online experiences that Amazon-weaned library customers expect, it takes significant funding at the local level to implement the best solutions.

But the good news is that when it comes to that local level, websites can’t compete with libraries. It’s a myth that young people don’t use libraries. Palfrey noted (and several youth services librarians in the audience agreed) that teenagers are among the highest user group of public libraries. In urban systems like Kansas City, public libraries are among the only places people can access the Internet and public computers. They are safe places for children, and they are also gateways to reading and learning to use technology. Thanks to programs like the KC Digital Media Lab, they are also becoming places to learn new skills and make cool things using the latest technology.

Of course, to truly stay relevant in the age of Google and beyond, libraries of the future will need to innovate beyond being community centers and Internet access points. A federated digital library like DPLA could provide all local libraries a valuable service. And that is taking the tech burden off of librarians so they can do what they do best: helping people find the right book, or the right app, to turn in their hands.