“With the gigabit infrastructure already leading to the growth of civic programs, nonprofit organizations and startups in KCMO and KCK, it was great to see the suburbs jump into the discussion,” said Aaron Deacon, Managing Director of KC Digital Drive, which organized the event.

The Brainzooming Group also helped to organize the Summit, as well as sponsor it. Other sponsors were Launch KC, Mozilla, UMKC and Story Torch. 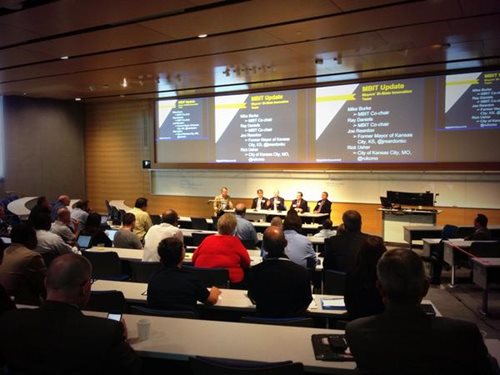 The event focused on updating the audience on progress made toward implementation of the KC Digital Drive Playbook for digital advancement in the region. Download the Playbook as PDF.

Highlights from the Discussion

The opening panel featured the Mayors’ Bistate Innovations Team (MBIT) core members, all of whom had a role in crafting the Playbook: Joe Reardon (former KCK mayor), Mike Burke (KCMO), Rick Usher (KCMO) and Ray Daniels (KCK). The speakers threw light on the importance of raising awareness not only for the playbook’s initiatives, but also for the need to advocate for gigabit access in all corners of our demographically diverse metro.

These words, which reverberated throughout the event’s Twitter discussion, stressed the need to make sure all KC families receive access to the network.

This thread carried through the first panel, which featured Michael Liimatta of Connecting for Good and Cheptoo Kositany-Buckner of the KC Public Library on the topic of digital inclusion.

Liimaata’s Connecting for Good organization has provided some 2,000 area residents with computer literacy training and even more with Internet access. The library, Kositany-Buckner explained, is also on the forefront of digital literacy, offering computer classes, a digital media lab for teens, job and small business resources, a Software Lending Library (now in beta) and other gigabit-enhanced projects in the works.

Drew Solomon of Kansas City’s EDC startup booster, Launch KC, spoke to the challenges facing the region on attracting venture capital. One of the most important factors in the process: assuring VCs that local startups will be successful in their own communities.

When it comes to gigabit applications, the health care community has been among the fastest to embrace new technology. A key player in this adoption is KU Med Center Telecommunications Outreach Director Steve Fennel, who discussed a number of fiber-empowered projects already in the works. These include a tool that monitors patients suffering from dementia, Children’s Mercy Hospital’s new SightDeck telehealth installation, and the newly launched FitnetHealth app, which recently achieved the #1 spot in the iTunes Store’s health category.

Panelist Ashley Hand, KCMO’s Chief Innovation Officer, highlighted the need for cities to develop higher standards of service to meet the needs of digitally connected citizens. The city recently announced a partnership with Cisco to launch a Smart+Connected Communities framework in KCMO involving smart city sensing and mobile citizen engagment. The city is also working with the Code for America Brigade to develop ideas for smart city applications for near-term deployment.

Kari Keefe of Mozilla expounded on the recent news that four area projects have been awarded a portion of $165,400 in grant money from Mozilla’s Gigabit Community Fund. Blake Miller of Think Big Partners gave updates on the incubator’s work in “building collisions” among KC’s business class.

Voices from the Suburbs

Concluding the panel session, Dave Holtwick of the City of Shawnee, Casey Wilhm of the Olathe Chamber of Commerce, and Mark Dickey of Lee’s Summit Chamber of Commerce talked about the opportunities and challenges local suburbs have been encountering as they seek to develop their own community initiatives related to the gig — which, in most areas of the metro, is not yet available.

Nonetheless, several suburban municipalities have taken the inititive to develop programs to nurture gigabit economic development. A few notables mentioned at the conference: Boost Lee’s Summit, the upcoming Market Center of Ideas in LS and the JoCoGROW networking series in Olathe. 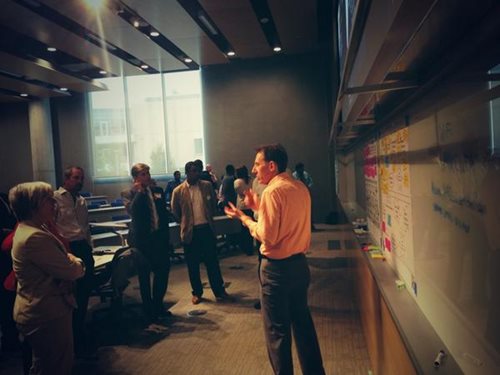 Mike Brown of the Brainzooming Group

For those not familiar, the Brainzooming method brings together diverse stakeholders inside a project or enterprise and challenges them with creative thinking exercises to produce new and often surprising insights. These insights can be used to solve a business problem, create a new product, build a new strategy — or a bevy of other applications.

In the case of the Gigabit City Summit, the goal of the three groups was three-fold:

The Brainzooming group led by King identified two dozen opportunities for the KC metro area to harness the gig for community benefit. Among them:

On the converse side, the challenges group led by Brown pointed out another 16 obstacles to clear, including:

Participants then voted on which initiatives from the KC Digital Drive Playbook were most important to their community.

The top five, by popular vote:

Interestingly, no single initiative was most popular among all three groups.

One group’s second-most popular choice — creating a Gigabit City Lab of next generation app beta testers — did not make it into the top five.

Eco dev dominated the rankings, which is not surprising given the heavy presence of city officials and EDCs in the crowd. However, education and technological growth had their place, too.

In the end, the first Gigabit City Summit proved a fruitful gathering of local civic leaders and gigabit upstarts reporting on successes and sharing ideas for the future.

The KC Digital Drive is planning a national, two-day conference for civic innovation, and all who came out for round one are invited to attend

The National Gigabit City Summit – North America is scheduled for January 13-15, 2015, also at UMKC’s Bloch School. Go to gigabitcitysummit.com to sign up for updates as they unfold.