by Katherine Hambrick | May 10, 2017 | Community Education and Awareness

Noah Worcester, UMKC Office of Digital Inclusion student organization president, spoke to the Coalition about creating digital equity within the UMKC school system. His organization has gone about identifying issues within the application process for UMKC. Currently, over 90% of students that apply to universities apply online, and even in the application to UMKC there was some confusing language and actions.

“We are passionate about providing educational opportunities for people that apply,” Worcester said. “Sometimes you have to teach people to even apply.”

Rachel Merlo from Google Fiber followed Worcester and updated the Coalition on Google Fiber’s Community Impact Report from 2016. The report covered Google Fiber’s eight projects across the United States, from Charlotte to Utah to Austin. Kansas City’s impact shone as a large portion of the report. Kansas City recorded 36,000 of the 115,000 national digital literacy training hours. We also installed gigabit access to 1,051 public housing units and there was a 6% overall increase in internet usage for digital adopters in the 2014-2015 year. 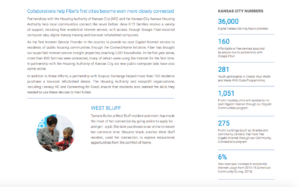 “We do have a long way to go. Whatever the digital divide looks like today, it will look different tomorrow,” Merlo said. “But we need to take a moment and celebrate all the work done in this room, so cheers to you!”

Finally, the Coalition split up into four separate working groups for a work session. Each group was focused on one of four separate digital inclusion themes and key objectives for 2017:

Over the next few digital inclusion meetings, the Coalition will continue to break out into the four groups, network among each other and work toward addressing, overcoming and kick-starting these three themes.

END_OF_DOCUMENT_TOKEN_TO_BE_REPLACED

Humana is a national health insurance company with an office based in Kansas City, Missouri. Humana launched its first Bold Goal Markets in 2015, and Kansas City was added to that list in 2017. The Bold Goal is to make the population in a given market 20% healthier by 2020 and beyond. This effort includes […]

END_OF_DOCUMENT_TOKEN_TO_BE_REPLACED

The Center for Practical Bioethics (CPB) and Cerner Corporation collaborated to present “Defining Ethical Guidelines for Augmented Intelligence” on August 9, 2019. KC Digital Drive representatives were invited to attend. From 8 am to 5 pm, attendees listened to lectures about ethics, augmented intelligence (AI), and healthcare and discussed these things in the design and […]