Ellen Suni may be the only law school dean in the country who has accounts on Github and Slack.

These tools, favored by software developers and advanced-level techies, are not commonly the domain of academicians. Or, for that matter, lawyers.

“Law schools don’t tend to be early adopters of almost anything,” Suni says.

The dean and her team at the UMKC School of Law are working to change that. Through a variety of programs including a new interdisciplinary class, internships with the city, partnerships with the Brooklyn Law School and the MIT Media Lab, and a growing relationship with the Code for KC Brigade and KC Digital Drive, they are injecting a powerful dose of technology into the law school’s offerings. 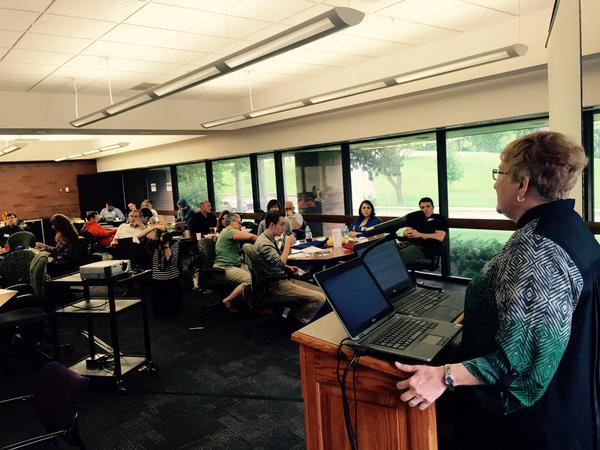 The shift began in the summer of 2014, when Dean Suni, Tony Luppino, a law professor and the law school’s Director of Entrepreneurship Programs and Michael Robak, Law School CTO and professor, developed the capstone class “Special Topics in Law, Technology and Public Policy.”  The interdisciplinary and inter-institutional course was created with the involvement of Dazza Greenwood, a lecturer and research scientist at the MIT Media Lab, as an outgrowth of the July, 2014 Law Schools, Technology and Access to Justice Conference hosted by the Law School under a grant from the Ewing Marion Kauffman Foundation. It included students from the Law School, the Bloch School of Management, the School of Computing and Engineering and the Lewis White Real Estate Center, who worked closely with government personnel from the City of Kansas City, MO in an effort to develop software apps to improve the policy and permitting processes of local government.

As part of the class, students traveled to Boston to visit with Nigel Jacob and Chris Osgood from the Boston Mayor’s Office of New Urban Mechanics and take part in a “prototype jam”—an event named and hosted by Greenwood as a variant of a hackathon (but one more understandable and acceptable to lawyers). Among the UMKC projects vetted at the Boston event was a sample decision tree/wizard tool developed in the class to help streamline the permitting process.

A second “prototype jam” took place on the UMKC campus in April 2015.  Code for KC volunteers Paul Barham, Ron House and Oleh Kovalchuke as well as legal technologists coming to Kansas City for the second Law Schools, Technology and Access to Justice conference assisted the students in refining their projects for the final presentations, which involved an automated system to assist transactional lawyers advising clients who want to start a business, a model for creating a data sharing agreement between a municipality and a user seeking to develop a product based on open data, a mobile app to provide zoning and other restrictions on a parcel and to develop “what if” scenarios for possible development, and a framework for a municipality to become a trusted resource for sharing personal ID information between a citizen and other municipal or business entities. 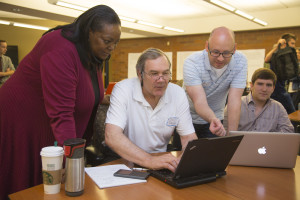 After its involvement in these two successful efforts, the law school was happy to host KC’s version of the National Day of Civic Hacking on June 6-7, 2015. Organized by KC Digital Drive through our KC Brigade, the hackathon brought together 60 participants to create applications to help community groups and make government more efficient and accessible to citizens. Two teams from the law school and eight others from Code for KC filled the classrooms and student lounges at UMKC for two days of coding and learning.

“Working with Code for KC allows students and faculty to learn the tech side from the people who have hands-on knowledge, while also serving the community,” Dean Suni says.

Third-year law student Kate Garman is currently serving as Innovation Analyst for Kansas City Mayor Sly James’ Innovation Office. The part-time post follows the completion of an internship in the Mayor’s office, where she was helping pick up slack as the City seeks a new Chief Innovation Officer following the summertime departure of Ashley Z. Hand. When Garman graduates in the spring of 2016, she expects to move to full-time status. 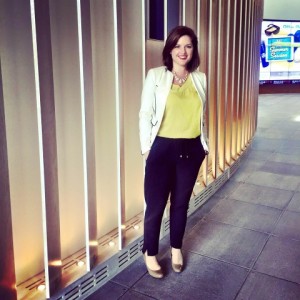 Kate Garman is crushing it as Innovation Analyst for Mayor Sly James.

A policy specialist, Garman’s role is to help the city foster a culture of innovation – particularly when it comes to the laws it creates around new technology.  Garman’s work ranges from traditional areas like permitting and procurement to how the city handles newer challenges like dealing with the sharing economy (think services like Uber and Airbnb) and the collection of data by sensors within the city’s Cisco-powered Living Lab.

For Garman, it’s a dream job.

“I went to UMKC with the hope that I could have involvement with urban policy,” Garman says. “I had no idea that it would put my career on such a giant trajectory.”

In addition to developing coursework on tech that helps cities and municipalities, the UMKC School of Law is also focusing on other areas where technology is crucial such as eDiscovery.  Another essential focus is using technology to help low and moderate income clients get legal assistance affordably through the use of digital tools that cut down on attorneys’ fees.

The big picture, says Professor Luppino, is using technology to train lawyers for a digital future and make law and legal processes increasingly accessible and efficient for more individuals and businesses.

“We’re focusing on how to make the delivery of legal services more affordable and how to streamline legal services and regulatory processes to better serve citizens and entrepreneurs,” Luppino says.

The Law School’s technology efforts will soon culminate in a new, innovation-focused Center for Law & Entrepreneurship. KC Digital Drive’s managing director Aaron Deacon is serving on the Center advisory board.

With the new Center, Dean Suni and her team hope to lead the charge for law schools across the country to prepare graduates for increasingly technology-oriented careers.

“Our view is that you can get out in front of technology and help lead it, or you can get run over by it,” Suni says. “I know which path we are choosing for our students and our school.”

UMKC School of Law is a generous sponsor of Forward to the Future.

Eric Roche, Chief Data Officer for KCMO and Code for KC Core Team member, spoke at Code for KC’s Learn Night on February 29, 2018.  The work done by the analysts in the Office of Performance Management where Eric works has earned Kansas City a Silver Certification awarded by What Works Cities. Eric’s presentation covered […]

END_OF_DOCUMENT_TOKEN_TO_BE_REPLACED

Did 2016 fly by for anyone else? It’s hard to believe that another year has come to a close, but as we reflect back on the last 12 months, we’re thrilled by what Code for KC and KC Digital Drive have accomplished, not to mention the foundation we’ve built to continue our work in 2017. […]

END_OF_DOCUMENT_TOKEN_TO_BE_REPLACED

Anyone who’s worked on a digital project like a website or an app knows it’s very much a work in progress. There’s the initial launch, of course, which is typically followed by a never-ending evolution: updates that introduce new or improved functionality, design changes and other enhancements. Since CommunityKC launched at the third annual Community […]