Tech Volunteers Needed: Grow Your Tech Skills and Help Your Neighbors at Code for KC 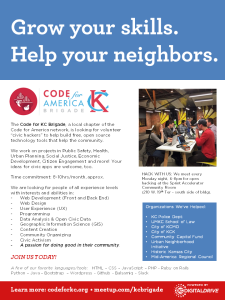 Grab a flyer for the break room!

In the past year, the Code for KC Brigade has grown by leaps and bounds. It started in late 2013 as a couple of lonely civic-minded coders meeting on Monday nights to gaze deep into the Git in search of ways to help their city through technology. Now on any given hack night, 15-20 civic tech enthusiasts get together inside the Sprint Community Room to dig for data, sketch mockups, log commits, and plot world domination in two hours a week.

We’re a loose, fun-loving bunch being managed by a core of volunteers through KC Digital Drive under the national Code for America banner. We’ve got veteran software developers, public data geeks, GIS buffs, and people who can’t code but want to do good. Right now, we have four or five healthy projects aimed at turning HTML and JavaScript apps into tools to better the community.

One of the projects, NeighborhoodStat, aims to give a street-level view of a neighborhood as seen through the eyes of data. What would you do if you knew crime was up in your neighborhood, and two liquor permits had just been applied for? Another project, Parcel Assessment Tool (or “P.A.T.”) wants to help developers cut through the red tape and build, build, build. Another, SafeAssist, will equip police and other first responders with info about people with mental health issues before they show up at the scene of a 911 call. Another, CommunityKC wants to make it easier for neighborhood groups to collaborate around good stuff like community gardens, after-school programs, and bike lanes.

But for these projects to be successful, and for new ones to be created, we need volunteers like you who have or want to have skills in things like:

In short, we are looking for tech-minded pros and amateurs like you who want to give back to their community.

If this sounds like you, then we want you to come down and spend some time with us. If you have an idea for an app, great. If not, we’ll find something for you to do. For some context, take a look at the Brigade Project Finder to get a sense of the kinds of projects we can build and import in the KC Brigade. 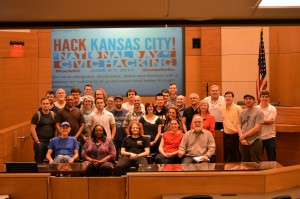 The Code for KC Class of 2015 at the National Day of Civic Hacking.

Or you can just ask yourself: What would you like to do more easily in KC?

That’s often where it starts. Maybe it’s building a Pinterest for all the animal shelters in town. Maybe it’s plotting a bike route between all the breweries.

If you’ve got the will, we’ll help you find the way.

How to Get Started

Join our Meetup.com group and come to a hack night. These are every Monday, 6-8pm, at the Sprint Accelerator community room (enter on the north side at 210 W. 19th Ter – knock on the window if it’s locked). You can also hit us up on Twitter @codeforkc or, if you have specific questions and want to talk to a person, email our fearless Captain, Paul Barham at pbarham@codeforamerica.org. He doesn’t bite — unless you are wearing a suit made of cheese enchilada, in which case you’re on your own.

Please note that there will be no hack nights Dec. 21 – Jan. 4, but we will be having a Christmas happy hour at Snow & Co. on Monday, Dec. 14. We will be celebrating  a couple of hack-idays coming up in this year, so look for news about hackathons and other cool events in March (CodeAcross), June (National Day of Civic Hacking) and beyond.

Now, if you do come, we need to warn you: You only get what you give. You may be the acest Rails developer on the planet. That doesn’t mean we will immediately have a world-crushing app for you to jump right into and ship by end Q4. We will do our best to accommodate your interest and skill levels, but please have patience. Social innovation doesn’t happen in one night. There’s huge potential in the group – and in promoting a culture of civic hacking in KC – but it takes time to get fully entrenched.  Once you do, though, we bet you’ll love it.