Startland News, the National Society of Black Engineers and the National Coalition for Digital Inclusion present to the KC CDI this month

by Katherine Hambrick | Mar 17, 2017 | Computers in the Home, Community Education and Awareness 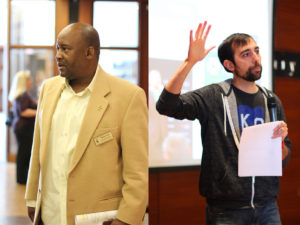 Angela Siefer spoke to the Coalition about the Net Inclusion Summit that will be held May 16-17 in St. Paul Minnesota. Early bird registration for this event ends April 6. The event includes speeches and breakout sessions over topics such as case studies in digital inclusion, the impact of a potential net neutrality reversal and how to market digital literacy courses, among many others.

William Wells of The National Society for Black Engineers informed the coalition about the NSBE Convention that will be held March 29- April 2. Members of the coalition can be involved in a variety of ways. Most notably, the Diverse by Design workshop, taking place on Wednesday, March 29 at the Marriott, will be an event centering around digital inclusion in the STEM workforce. The event is free and registration can be found on Eventbrite. There will be about 10,000 people from all over the nation attending this event: professionals, collegiates, educators and even students from K – 12.

Adam Arredondo was the final speaker from the Kansas City publication Startland News, which hopes to further cultivate a relationship between their news publication and the Kansas City Coalition for Digital Inclusion. Arredondo discussed the potential for intern contributors from local high schools as well as the idea of working closely with our non-profit coalition to spread our news to Kansas City. Though Startland has made its name as Kansas City’s home for “innovation” news, Adam Arredondo made it clear that Startland wants to cover digital inclusion efforts as well.

“We break [ours news coverage] down into 5 pieces: innovators, educators, government, corporations and investors,” Arredondo said. “We actively work to cover all of those pieces.”

Just last week, Meghan Levota reported on the Next Century Cities broadband letter to Congress and President Trump, and last month, the site did a profile on our very own Ina Montgomery and her mission to empower black women in technology – related careers. In addition to covering general digital inclusion issues, Arredondo said that Startland is open to sharing articles between their news site and Coalition members’ sites.