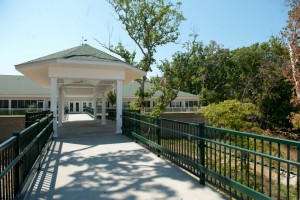 TigerPlace in Columbia, MO: a test bed of embedded sensors. (Via Facebook)

In the middle of Missouri, medical technology is making big improvements to the quality of life for seniors.

TigerPlace, a senior housing facility outside Columbia, is home to a pilot project that is allowing nurses to use sensors installed in residents’ apartments to detect signs of trouble and take immediate action, often heading off the need for hospitalization.

Earlier this week, project leader Marjorie Skubic, who is director of the University of Missouri’s Center for Eldercare and Rehabilitation Technology (CERT), told members of the Missouri Senate Special Committee on Aging about the project’s success in allowing residents like Eva to age in place.

“Skubic told the senators that the motion, bed, and chair sensors installed in her apartment detected changes in Eva’s patterns. These alerted others to a worsening of her health. Without immediate action, Eva would have been readmitted to the hospital. Skubic said the nurse monitoring Eva said what was needed was a change in medication, not re-hospitalization.”

Skubic also described the project earlier this year when she spoke at KC Digital Drive’s February Digital Health Innovation Forum. She explained how the project leverages broadband-enabled network technology to allow movement-recognition sensors (such as you might find in a Microsoft Kinect) to observe residents, learn their patterns, and transmit alerts to clinical staff when there is a deviation that might indicate a medical problem.

It’s a real-world story of how local innovators are bringing together medicine, sensors, the Internet of Things (Iot), and broadband to directly impact people’s lives. As Skubic told the Senate, the project has successfully detected early signs of pneumonia, urinary tract infections, pain, delirium, and hypo-glycaemia.

Skubic’s team at CERT recently completed a similar embedded-sensor test pilot in Kansas City to determine whether the city’s fiber-optic infrastructure improved the service. The project was tested in private residences using Google Fiber and was funded by a National Science Foundation EAGER grant obtained through KC Digital Drive partner US Ignite.

This project is part of the broader, regional collaboration at work through the I-70 Corridor Network on Aging.

Read the full Senate story here, and join our mailing list to receive updates about digital health innovation in the region.