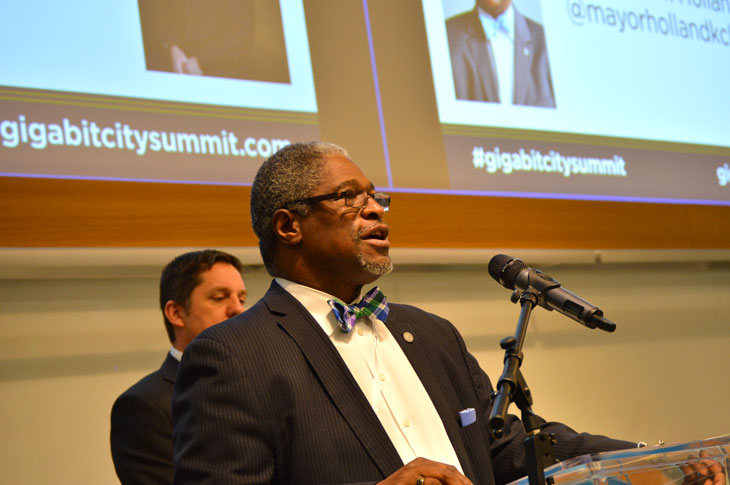 Mayor Sly James of KCMO at the Gigabit City Summit.

Mayor Sly James and Mayor Mark Holland:
Both agreed upon the necessity of broadband access at improving the quality of life of people in the new economy. To many in the audience, this went without saying, but many families — and many small businesses (small business access was a recurring theme throughout the conference) — still exist beyond the digital divide.

Blair Levin Keynote: The Early Adopter’s Dilemma
Data drives the new economy, and cities must think about what networks they want to have 10 years from now. City leaders who choose to invest now in fiber will be in a healthy, competitive position ten years from now. Cities who stick with cable and copper will have a difficult time catching up in the long term.
Full speech. Slide deck.

Panel: Laying a Community Foundation
Mike Brown (Brainzooming), Herb Sih (Think Big Partners), Margaret May (Ivanhoe), Jase Wilson (Neighborly) / Moderator: Alan Fitzpatrick (Charlotte Hearts Gigabit)
Even before Google Fiber began its buildout, the Kansas City community began mobilizing itself organically, both in the entrepreneurial space (Think Big) and at the grassroots community level (Brainzooming, SMCKC/Neighborly, Ivanhoe). A city led by organizers who recognize the potentials of gigabit connectivity and begin proactive planning will be better off than one that waits for the first fiber lines to be laid.
Slide decks: Mike Brown

Panel: Moving from Checklist to Playbook
Mike Burke (MBIT), Joe Reardon (former KCK mayor), Dave Sandel (Sandel & Associates in St. Louis), David Warm (MARC) / Moderator: Yiaway Yeh (CIO of Nashville, TN)
The work of innovation in cities is 10% technology and 90% people. For that reason, we should not rely on the provider (in KC’s case, Google Fiber) to do the hard work of bringing about positive social outcomes. As explained by the panel, consisting of members of the KCMO/KCK Mayors Bistate Innovations Team, these concepts were at the heart of the planning process MBIT undertook in composing a community Playbook for broadband adoption. 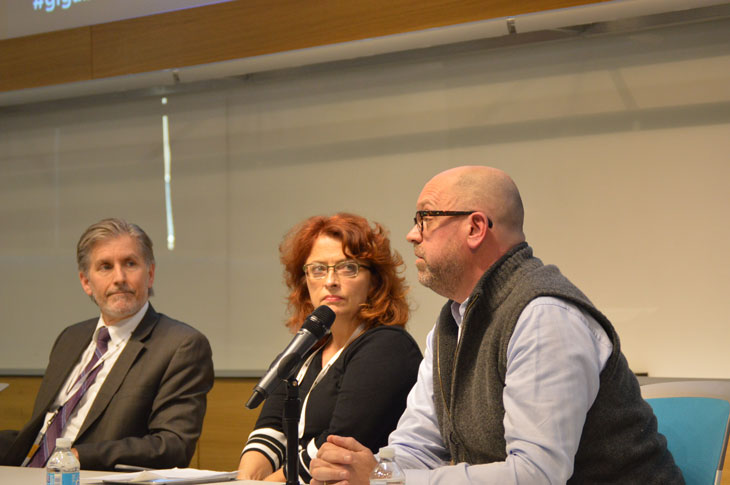 Boyd Cohen Keynote: From Gigabit City to Smart City
For cities to truly foster innovation, it’s all about empowering individuals: the makers, developers and small startups that constitute “civic entrepreneurs.” Cities cannot attract these in the same way they do large tech companies. They must instead provide nurturing environments for the creative class to move in to, enjoy a quality of life, and get their ideas off the ground. Much of that has to do more with schools and jobs than business-favoring initiatives.
Cohen’s slide deck. 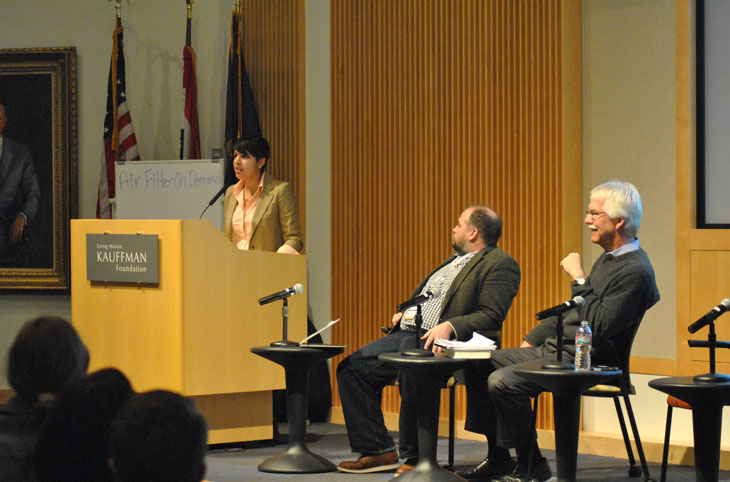 Panel: Scaling Community Across the U.S.
Catherine Bracy (Code for America), Chris Lawrence (Mozilla), Bill Wallace (US Ignite) / Moderator: Dan O’Neil (Smart Chicago Collaborative)
Best practices in building national communities and doers from civic hackers to innovative educators to gigabit app developers. Code for America took a page from Obama’s use of digitally driven grassroots organization and built upon passions and projects that were already present in communities. Hive scales by latching onto the ideas that motivate educators and students in technologically enhanced learning. US Ignite helps participants build apps that can be deployed in other gigabit cities.
Presentations: Chris Lawrence, Bill Wallace

Panel: Connecting Communities Within a City
Ken Hays (Chattanooga), Bradley Holt (Burlington, VT), Daniel O’ Neil (Smart Chicago) / Moderator: Aaron Deacon (KC Digital Drive)
Each of the cities featured in this panel face different challenges and opportunities that come with using technology to drive civic good. In Chattanooga, many resources were pulled into building a municipal gigabit network, and the Enterprise Center pulled together public and private entities. In Burlington, VT, grassroots hackers and developers coalesced around the Code for America Brigade, a Civic Cloud Collaborative, and a partnership with US Ignite. In Chicago, which still does not have gigabit access, Smart Chicago strives to improve people’s lives through digital access and literacy programs and a commitment to open data.
Presentations: Ken Hays, Bradley Holt, Dan O’Neil

Panel: Building the Future with Gigabit Apps
Will Barkis (Orange Telecom), Glenn Ricart (US Ignite), Oliver Schuermann (Juniper) / Moderator: Kari Keefe (Mozilla)
Though few apps have been built that use 100% of the gigabit, the network brings advances in technology that have the potential to impact daily life: high bandwidth for handling multiple devices at home, low latency for video streaming and pseudo-real human interactions; symmetrical bandwidth providing seamless upload/download activities crucial to technology-driven workplaces; and high-quality experiences, leading to greater possibilities in fields like education and medicine.
Presentations: Will Barkis, Glenn Ricart

Panel: The Digitally Underserved in a Time of Broadband Abundance
Cheptoo Kositany-Buckner (KC Library), Michael Liimatta (Connecting for Good), Deb Socia (Next Century Cities) / Moderator: Mary Beth Henry (Portland, OR)
When technology powers the economy, making sure all have access to it becomes a digital inclusion is an economic development issue. Libraries have always been at the forefront of getting people connecting. New nonprofits like KC’s Connecting for Good sell affordable ($75) refurbished PCs, mobile hotspots, and provide free training. Led by a former school principal, Next Century Cities is leading the charge in engaging city leaders across the nation in placing digital literacy on the eco devo agenda.

Panel: Making it Pay – How to Make a Gig a Powerful Economic Engine
Michael Curri (Strategic Networks Group), Andy Huckaba (City of Lenexa, KS), Drew Solomon (Kansas City EDC and Launch KC) / Moderator: Jessica Thesing (Salt Lake City, UT)
Cities that land high-speed broadband have many opportunities to choose from when it comes to focusing economic development efforts: education, small business, the IT workforce, etc. But what trends are emerging that demonstrate ROI? For one thing, there is no single killer gigabit app; rather, cities should be looking at how the gigabit is enabling small to mid-size businesses to operate like corporations. Additionally, broadband is fueling growth in some of the most profitable verticals, include finance.
Presentations: Michael Curri

Susan Crawford Keynote: From Gigabit City to Responsive City
For Crawford, broadband is unique because it enhances the human experience through the notion of “presence.” As a communications technology, broadband is remarkably powerful because it allows people to be closer to each other and be understood across distance. In that sense, it is the most human technology. Broadband fiber is essential to the future success of our country and making sure all have access is one of the great social justice issues of our time. 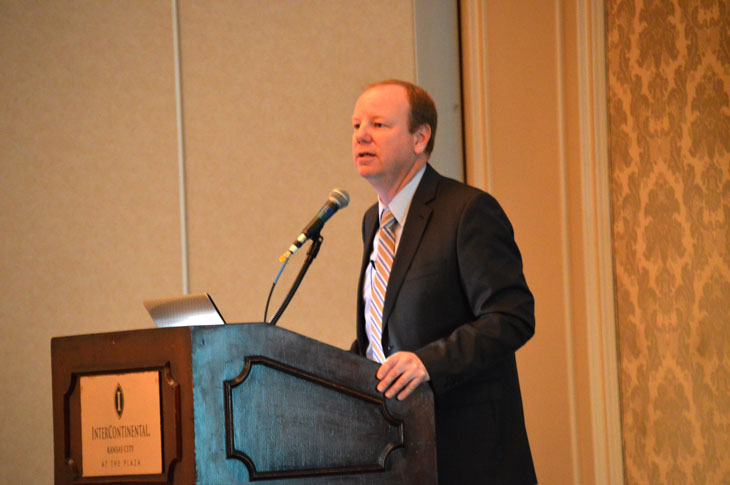 Joe Reardon Keynote: The Importance of the Gig
There were many reasons why Google ultimately chose Kansas City to launch its fiber network. But chief among them were the negotiating tact and diplomacy of then-mayor of Kansas City, Kansas, Joe Reardon. In his talk to close the summit, Reardon spoke about the process he went through to educate his constituents about the importance of committing to and adopting Google Fiber, as well as the deal itself. For citizen engagement, Reardon recommended meeting citizens where they are. It’s difficult to sell abstractions; reality-based show-and-tell works much better. Kansas City’s experience with Google Fiber — which has so far been an overall success — demonstrates that there is critical mass of U.S. cities seeking the service. Bringing it to a city creates a web of issues. On the city hall side, government transparency, open data and citizen engagement all come into play when cities look at building out a broadband infrastructure. For economic developers, broadband expands the tax base. Framing the discussion for every stakeholder is key.