As our civic-tech arm, Code for KC rounds up volunteer coders, data geeks and designers to build these community apps, which, ideally, will be useful to actual people in the community.

KC’s civic UX group will be led by Jo Elliott, assistant professor of Psychology and director of Human Factors and Usability at Missouri Western.

“Jo has been a guiding light lately for Code for KC,” says Paul Barham, Code for KC Captain. “Our volunteer civic hackers have learned so much from working with her and her awesome students to make our projects better serve their intended users.”

Professor Elliott and her students recently provided in-depth UX testing for four community apps at the November Prototype Jam, organized by the UMKC School of Law in partnership with Code for KC. 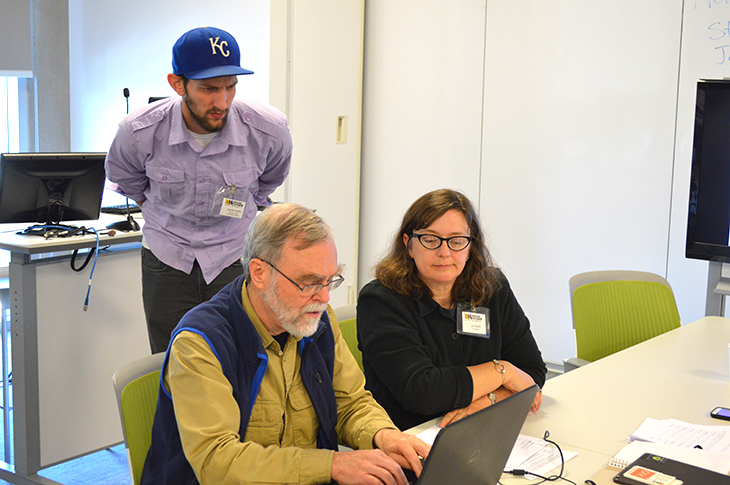 At the event, Jo and her students assisted volunteer testers in completing tasks and answering survey questions about each app. The four apps were developed by teams of Code for KC coders and students in the law school’s “Law, Technology, and Public Policy” class taught by professors Tony Luppino, Michael Robak and Jim DeLisle.

Now, Jo and her students will be taking their UX prowess to the streets of KC.

We Want Your Apps

Do you have a website, online interactive tool, or mobile app that provides public services? Do you want your app tested according to industry best practices to make sure it’s doing what it was designed to do? The KC civic UX group is looking for stakeholders. Contact Jason Harper, jharper@kcdigitaldrive.org, to arrange a testing session. Once your app has been tested, a full report including video screencasts will be provided. This service is free.

Testing sessions will be held two Saturdays a month starting in February 2016 at the Kansas City Public Library.

If you would like to learn about UX while volunteering as a civic app tester, we’d love to have you. We promise to make it worth your while. Contact Jason Harper, jharper@kcdigitaldrive.org, to get involved.