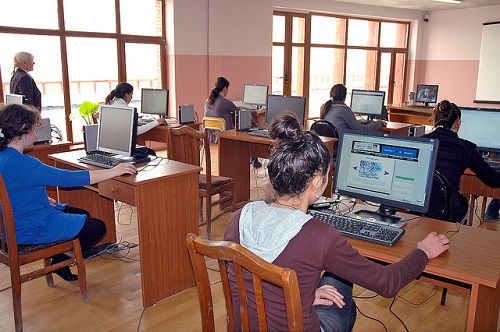 Technology isn’t new to the American classroom. Schools have had computers for decades, and they’ve been getting wired with Internet/network access since the late ’90s.

But just like an internet connection at home doesn’t guarantee you’ll teach yourself (or your kids) to speak a new language, neither does a connection at school guarantee a revolution in learning. There must first be human innovation in place: advanced curriculum development, buy-in from districts and legislators, teacher education, bandwidth structure to support it all — in short, a massive change to the way we do K-12 education in America.

This change is being brought about by the concept of “connected learning.”

As IFTF fellow Richard Adler defines it in an excellent Computer World op-ed titled “Broadband and the future of learning“:

Connected learning leverages digital network technology to empower students to pursue their own interests and assemble their own curriculums, making it possible for them to learn anytime, in any place and at any pace.

Initially, schools have not been on the leading edge of the connected learning movement. Rather, that’s been spearheaded by institutions such as libraries, museums, after-school programs and cutting-edge nonprofits like YouMedia Labs and HIVE Learning Communities, one of which has recently come online in Kansas City (and is being supported by KC Digital Drive).

For connected learning to find a place in schools, Adler argues, there must first be bandwidth enough to support the use of hundreds of connected devices — namely, students’ laptops, tablets and smartphones — which serve serve as “on-ramps” to self-guided learning.

Next, the students must be able to take those devices home and stay connected.

Increasingly affordable broadband-to-the-home packages are making that at least more of an economic possibility to underprivileged families. But, in Kansas City, at least, where a quarter of homes are not connected to broadband, there is still a great need for community-driven digital inclusion efforts.

In the end, it takes not only thorough technical adoption of broadband in communities and schools but also changes to the way we use technology to prepare children for the future.

END_OF_DOCUMENT_TOKEN_TO_BE_REPLACED

Nestled amid the tall buildings of downtown KC, The Crossroads Academy is a case study in what a savvy school can do with a gigabit fiber connection.

END_OF_DOCUMENT_TOKEN_TO_BE_REPLACED

If you are a STEM advocate seeking opportunities to work with Kansas City youth, STEMS on the VINES (the extra “S” is for Sustainability) may be for you.