Community Projects in KC: There’s A Map for That 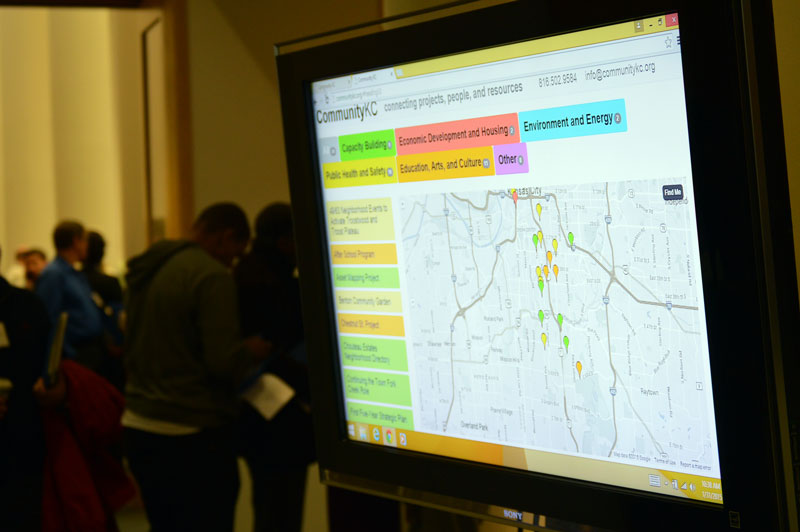 The CommunityKC.org map updated itself live at the event.

In the face-to-face world of community organizing, it can be a challenge to keep in regular contact with neighborhoods around your city.

If your neighborhood association wanted to raise a community garden but had no experience in navigating permitting and licensing issues with the city — much less when to plant spinach versus strawberries — a little advice from a more experienced neighborhood agronomist could go a long way.

Or what about installing a bike lane? Or rehabbing old houses on a dilapidated street? Projects like these go on all the time around Kansas City, but they are rarely heard about beyond the community center meeting rooms where they are launched and the streets they impact.

This lack of intra-city communications makes the work of neighborhood leaders harder than it should be.

“It’s hard to find out what’s going on without going to a meeting,” says Charles Connor, president of the N.O.B.L.E. Neighborhood Association in south Kansas City.

Wouldn’t it be nice if there were a tool – maybe an app or a website – that tracked community projects in progress around the city?

A Job for Civic Hackers 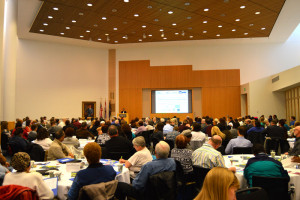 The City of Kansas City lists well over 250 neighborhood and homes associations. Representatives from quite a few of them, as well as ones from around the adjoining Kansas and Missouri suburbs, packed into the Kauffman Foundation this past Saturday for the Third Annual Community Development Workshop.

Organized by the Community Capital Fund, LISC, and CCO, the workshop is designed to get neighborhood leaders talking and collaborating, sharing resources and learning best practices for neighborhood-led initiatives.

This year’s workshop was different and more innovative from past years’ in that it incorporated a new kind of resource: a digital tool meant to address the ongoing communication breakdown.

Already up and running at CommunityKC.org, the tool is an interactive map of community projects organized by theme (e.g. Economic Development, Environment and Energy) and pinned to specific locations on a map of Kansas City. Each location contains detailed information about the project, including a description, contact person and timeframe for completion.

In addition to providing useful information, the tool is a living portrait of citizens at work improving quality of life for those around them.

“We want this map to replace the crime map,” Sadowski said.

The CommunityKC online map began as an in-person project. 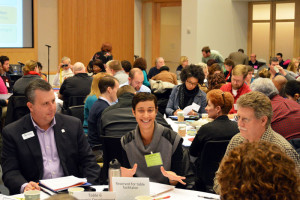 CCF initiated the development of CommunityKC by approaching Sadowski last fall to create a physical mapping activity for the workshop.  Since then, she and other recruited volunteers have been working closely with CCF to develop the project.

Among those volunteers were those who could take it to a digital level: the volunteer software coders and web developers of the Kansas City Code for America Brigade. Established in early 2014 after Kansas City became a Code for America project city, the Brigade meets every week to create digital apps that use public data fill a community need. KC Digital Drive is the official host organization for Code for KC.

At the Saturday workshop, paper forms were distributed to the audience to collect information about projects that would go onto the map. After a facilitation session, the forms were collected and volunteers input the data into a Google Form which was then fed into the CommunityKC mapping tool.

In the course of about two hours, a roomful of volunteers under the command of Brigade captain Paul Barham logged more than 100 projects. As they worked, a flatscreen TV in the lobby of the Kauffman Foundation displayed the information as it was updated live. 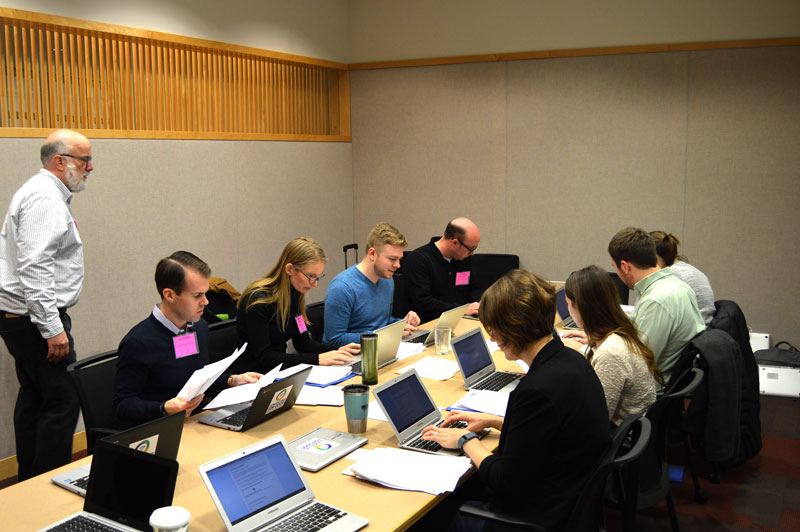 As new pins sprung to life before his eyes, Charles Connor beamed in delight.

“This gives you something to look at and understand,” he said. “This gives you a lot of opportunity to study what’s going on in the city, be more proactive with your programs and partner with others.”

“The closer we get, the more problems we can all solve,” Connor said.

There are still many kinks to work out with CommunityKC before it can become a true bridge-building, problem-solving powerhouse. Sadowski plans to continue working with the Brigade to build out features and functionality in the coming weeks.

Until then, if you are interested in joining the Code for KC Brigade as a civic hacker, data enthusiast, or policy junkie, join the meetup group or visit codeforkc.org.