Kansas City Looks to the Connected Future with Next Century Cities 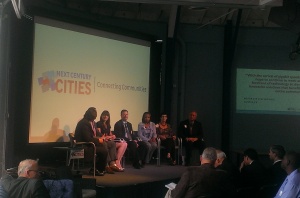 The Next Century Cities launch in Santa Monica, CA.

When we started to ask two years ago what our success metrics should be for the gigabit fiber rollout in Kansas City, I was looking for a number of households—how many gigabit homes should be a marker of a successful experiment? A conversation with Blair Levin, author of the National Broadband Plan, added another dimension to my thinking.

It’s not how many Kansas Citians have gigabit at home, he argued, it’s how many other cities adopt the infrastructure. As Google Fiber expands to other markets, other providers like AT&T, Cox, and CenturyLink roll out gigabit offerings, and more cities and utilities look to add network capacity, we’ve seen clear signs of this success.

Offering our gigabit experience in this national conversation became a key strategy in the KC Digital Drive playbook, and it has led to positive developments like the Gigabit City Summit this Jan. 2015, but there is still a considerable amount of work to be done.

We are pleased that Kansas City is an inaugural partner in the launch of an exciting new initiative called Next Century Cities. This opportunity is designed to elevate and highlight the work of mayors who are pursuing next generation broadband initiatives. Last month, KC Digital Drive had the fortune to represent KCK and KCMO and join KCMO CIO Ashley Hand and 32 cities at the launch event in Santa Monica, CA.

The Next Century Cities organization has grown out of a year’s worth of efforts led by the Ford Foundation and driven by the needs of the cities involved. Collectively, we identified the need for elevating the conversation around broadband infrastructure on a national level, providing shared support for cities implementing gigabit networks, and providing tools for success that those cities can use.

It is led by Deb Socia, a longtime educator and champion of digital inclusion who formerly led Boston’s Tech Goes Home. The principles of Next Century Cities should look familiar to anyone who has participated in our work the past several years:

As other cities throughout the region roll out next generation Internet, we look forward to building our regional membership in the Next Century Cities organization, and KC Digital Drive looks forward to serving our local governments as a point of contact for this work. Feel free to send me an email for more information to info@kcdigitaldrive.org. Check out the direct responses from Mayor James’s and Mayor Holland’s office as well.