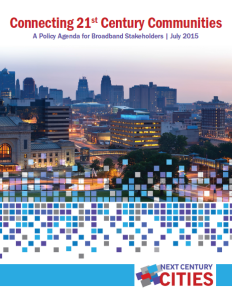 Kansas City was cited as an exemplar in Next Century Cities broadband agenda.

The Kansas City region was highlighted as an example of how best to develop high-quality broadband networks in a new policy agenda from Next Century Cities. Kansas City. Mo., and Kansas City, Kan., are both  members of Next Century Cities, a city-to-city collaborative of 100 mayors who support fast, affordable, and reliable Internet.

“Connecting 21st Century Communities: A Policy Agenda for Broadband Stakeholders” cites KC region nonprofit KC Digital Drive as an example of how to Improve Civil Society and Empower Communities through philanthropically supported partnerships with nonprofits and their local governments.

The new resource provides concrete policies and actions for local, state, and federal governments, as well as community members and philanthropic organizations, that will support the development of high-quality broadband networks throughout the country. (Download the report here.)

In the report, KC Digital Drive is recognized for its efforts in working with both Kansas City, Mo., and Kansas City, Kan., to ensure that all members the community can reap the benefits of broadband Internet.

Projects underway in the KC metro area focus on using the gigabit fiber infrastructure to close the digital divide, spur economic development, and develop next-generation applications in vital areas such as healthcare, education, government and the arts.

“In the 21st century, Internet access has emerged as more than just an information superhighway – it has become critical infrastructure — connecting citizens, businesses, and communities alike to new opportunities,” said Deb Socia, Executive Director of Next Century Cities. “This new policy agenda from Next Century Cities is designed to give communities across the country a guide for how leaders from all levels of government, as well as other stakeholders, can work together to make tangible progress in creating the broadband infrastructure needed today.”

Next Century Cities is a bipartisan, non-profit initiative with the mission of supporting communities and their elected leaders as they seek to establish and leverage gigabit level Internet. This newly-released policy agenda marks the latest informational resource provided by Next Century Cities to its growing membership.