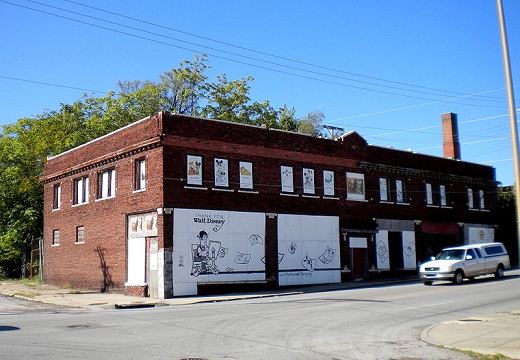 Could Walt Disney’s former studio be a new home for digital storytelling in KC?

If you follow trends in new media, you’ve probably heard the phrase “digital storytelling” pop up – most likely in the past few years.

Perhaps it was in the context of the ad world’s newer uses of “branded content,” such as Dove’s socially conscious “Real Beauty Sketches” video series, or Chipotle’s environmentally aimed “Scarecrow” short film and video game.

Or maybe it was in the context of Hollywood’s increasingly sophisticated use of CGI to produce jaw-dropping special effects. Or the rise of YouTube and Vine celebrities.

Whether homespun or professional, traditional storytellers have been steadily adopting digital methods to make their stories more powerful and persuasive.

It turns out that in Kansas City, digital storytelling is actually nothing new – some emergent, trendy niche. In fact, it’s already established business.

According to research by the Mid-America Regional Council, there are already an estimated 34,743 jobs in the field of digital storytelling (download the report). These jobs are mostly found at firms that specialize in trades like Advertising (VML, Barkley), Educational Media (Tall Oak Productions), Multimedia Production (Hallmark Cards, Propaganda3), News and Entertainment (AMC, BranitFX), Web & Social (Sporting Innovations) and other enterprises, some of which, like Hallmark, have specialized in storytelling since the early days of print consumption.

During his time at the greeting-card giant, Ron Green developed a program aimed at providing traditional graphic artists and writers with the ability to ride the changes in an increasingly digital world. Called Hallmark Creative U, the program was designed to nurture in-house talent so that the company wouldn’t need to outsource projects, such as ecards, that required digital skills to build.

With his new endeavor, the digiSTORYcenter, Green wants to take his passion for digital storytelling and community education to new levels.

“The goal is to make Kansas City a hub for digital storytelling,” Green says. “We’ve already got industry-leading talent, we just nee

d to build awareness of what we’ve got to offer and show the economic impact.”

To help him get that point across, KC Digital Drive is teaming up with Green to craft a Digital Storytelling play for the city’s gigabit Playbook.

“Digital storytelling attracts huge talent to the market — and that talent needs 1 gig up and down to move massive media files. Plus with Ron’s vision for broader community outreach, it only makes sense to partner,” says Aaron Deacon, managing director for KC Digital Drive.

In addition to KC Digital Drive and MARC, Green has attracted the attention of other area economic development stakeholders, including KCnext, KCSourceLink and the Full Employment Council, all of whom provided support to Green’s Digital Storytelling Forum in 2012.

Called the Power of Digital Storytelling and scheduled for October 22, 2014, the conference brings a roster of heavyweights including marketing guru Jay Baer (Convince and Convert), Brandon Oldenberg of Moonbot Studios (who, incidentally, co-directed Chipotle’s Scarecrow), Bob Johansen of Institute for the Future, Paul Debevec of USC’s Institute for Creative Technologies, and Brian Storm of the Webby-winning MediaStorm agency.

All told, the conference will demonstrate the power of digital storytelling to boost regional economies.

But beyond showing the economical impact, Green is looking long-term toward impacting education — particularly in Kansas City’s urban core. He is hoping to find a permanent location for digiSTORYcenter in KC-native Walt Disney’s former Laugh-o-Gram Studio at 31st and Forest. Owned by Thank You Walt Disney, which is working to restore the building, the entertainment industry legend’s former studio is situated squarely on the border of KC’s digital and socioeconomic divide.

“We want to grow the local economy and build our talent base of working professionals,” Green says. “But then we want to inspire and educate the next generation of digital storytellers.”

Those interested in attending to the conference can grab a limited $100 discount by entering the promo code “story100” on the Eventbrite page.

Steve Noll, former Executive Director, and Brent Schondelmeyer, board member, of the Jackson County Historical Society (JCHS), spoke at Code for KC’s Learn Night on April 23, 2018. They shared information about how the Wilborn Collection came to be, what it represents, and challenges the JCHS faces going forward.  The Wilborn Collection is a set […]

END_OF_DOCUMENT_TOKEN_TO_BE_REPLACED

Thinking of coming out for Capture? Here’s all you need to know to make film history Sept. 18-20 in Kansas City.

END_OF_DOCUMENT_TOKEN_TO_BE_REPLACED

During this year’s Techweek Capture is a one-of-a-kind creative challenge uniting the film and tech communities of two cities pulsing with Gigabit Internet.