Elizabeth Blanchard Hills created her company, CareConnext, when, after on assignment as a TV healthcare journalist, she observed how many cardiac failure patients slip through the cracks at the point of discharge. Her idea initially was to create a series of videos to send home with patients to help them maintain their health regimens between visits.

Her partner at University of Medical Center, Carol Smith, used the videos over a five-year time period and reduced readmissions by about 35%. Scientifically, the program seemed to work, but because physicians make money on a fee-for-service basis, it didn’t seem economically viable. When the Affordable Care Act passed in 2010, the legislation included a readmissions penalty clause. From there, Hills and Smith felt strongly that they could work with the change from a fee-for-service business model to a outcomes-based model, which would improve adoption rates.

That’s when CareConnext was born. The company collaborated with Turning Point through the University of Kansas to expand their science-based pilot to a real-world reimbursement value project with which hospitals could attach real savings to the outcome-based service model. 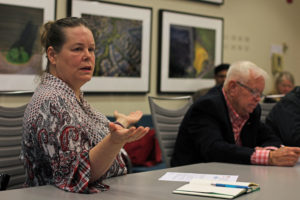 The process is labor intensive thus far, and the company is looking for new digital opportunities to expand care. Efficiently acquiring patients that need the help, and expanding the peer-to-peer communication platform are among some of the areas where they can implement technology.

The company is currently working with Kansas City Quality Improvement Consortium to take CareConnext community-wide, and are keeping their eyes on the digital health sphere. After discharge, patients have four sessions for six months, during which they watch a video as a group. The video prompts a non-judgmental, in-depth discussion about real-life issues they may face as cardiac patients. Topics range from adequate nutrition to marijuana use as a heart failure patient.

Hills and Smith insist that the communication peer-to-peer between patients is just as important as provider-to-patient conversations in order to keep their patients healthy and out of the hospital. The biggest issue causing re-admittance is called being “too wet” where the patients drink too much water and eat too much salt, or being “too dry” where the opposite happens. The steps to controlling these issues are simple, but the onus is on the patient, and when patients have supportive groups with accurate medical information, they take charge of their own health and take the ramifications more seriously.

“With the support of caregivers and family…there are some determined people who can do it by themselves, but in my mind it takes a village,” Hills said at the Kansas City Digital Drive Health Innovation Team meeting on March 29.

The peer groups have proven to help the patients tremendously, but Hills would also love to have a digital medical application that can help them track their moods, weight and food and beverage consumption every day.

For the Heart and Stroke Collaborative, another group represented in our Health Innovation Team, focused after-care is an important way to reduce costs. According to Linda Gerber, Vice President of Healthcare Technologies at Pershing, Yoakley & Associates, the mean cost-of-care per episode for cardiac failure is $12,605 in hospitalization alone, and the 90 days of post-care is around another $12,000.

In addition to her her work, Gerber also has an intimate knowledge of the issues surrounding failed aftercare.

“My father was just transferred from a hospital [to] KU,” she shared. “Upon discharge my father was provided a list of all they had his medications in the care plan sent home with him. However, unbeknownst to my Mom and Dad, all but one of the electronic medications didn’t go through to CVS, so the one prescription did not get filled. A few days later he started having chest pains and irregular heartbeat. After a phone call and then reconciling his medicine bottles with the printed medication list, it was discovered that one medicine prescribed was missing– and that was the specific medicine that keeps the heart beating normally. Problem solved,” she said.

“So there’s just so many little pieces that keeps them on the right on the track, and it just takes [the patients], along with family and care managers staying on top of any issues that arise to avoid another trip to the hospital.”

END_OF_DOCUMENT_TOKEN_TO_BE_REPLACED

KC Digital Drive and the UMKC Innovation Center are seeking to recruit 20 entrepreneurial fellows as part of a project to fund and support innovative solutions for needs exposed by the COVID-19 pandemic.