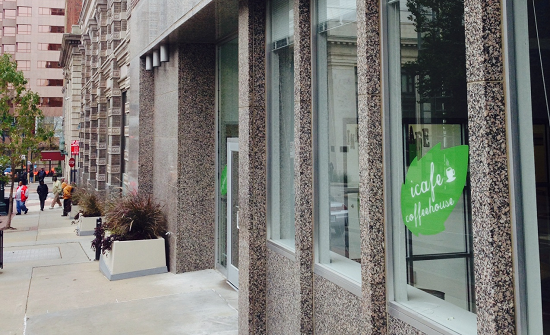 The iCafe was surveyed in KC Digital Drive’s study of local spaces that lack the gig.

A study conducted in the summer of 2014 by KC Digital Drive in partnership with the Kansas City EDC’s LaunchKC initiative revealed that gigabit access for tenants is not currently available at most local coworking and startup incubator spaces. The high cost for the service and the lack of immediate demand among entrepreneur tenant-users were the primary reasons cited.

At the same time, the study found, other cities around the country—most without widespread home access to gigabit Internet speeds—are increasingly ensuring that such speeds are available in their innovation hubs.

The full report (available here: PDF) outlined several proposed steps to address this gap in Kansas City, and today we are pleased to announce the first with the beta launch of Gigaspots.org.

The Gigaspots program simply creates an entry point for entrepreneurs who need access to ultrahigh speed Internet. It also serves as an entry point for these innovators into the broader gigabit developer ecosystem that KC Digital Drive helps to organize, including partnerships with US Ignite, the Mozilla Gigabit Community Fund, 1 Billion Bits, and the Gigabit City Lab.

While gigabit access is not specifically part of the tenant package at local coworking spaces, we are working with partners including the Digital Sandbox, the University of Kansas Bioscience and Technology Business Center (BTBC-KU), Homes for Hackers, and the Kansas City Public Library to help make their resources available to a broader pool of innovators.

The Importance of the Gigabit

The importance of gigabit access for entrepreneurs is underscored in the recent report “Killer Apps in the Gigabit Age” from the Pew Research Center. Eighty-six percent (86%) of the more than 1,400 internet and computing experts surveyed in the report agree that there will be “new, distinctive, and uniquely compelling technology applications that capitalize upon significant increases in bandwidth in the US between now and 2025.”

This makes it not a question of whether or even when game-changing applications will be created that require gigabit fiber – but rather where. If Kansas City seeks to take advantage of its gigabit network, local entrepreneurs and developers must be given every opportunity to access it. (Read a list of future apps requiring gigabit fiber.

The responses revealed that Internet speeds within the coworking and incubator spaces surveyed ranged from shared 1.5 to 400 megabits per second, with typical speeds in the 10-30 Mbps range. The highest speeds were available at the Digital Sandbox inside Union Station (100 Mbps from Time Warner Cable) and BTBC-KU (400 Mbps from KanREN). Both facilities have access to 1 Gbps connections but they are not configured to provide this service to users.

Though most coworking and incubator facility managers recognized the marketing advantage that would come with gigabit fiber, none were willing to pay the $1,500-$3,000-monthly market rate for the service. Additionally, their tenants were not demanding gigabit speeds.

Some of the use cases for faster Internet speeds included: large file transfers, code pushes, software updates, multiple, simultaneous video conferencing; classroom teaching and viewing, establishing a hub for Pi computers, and real-time web development. Many of these can be achieved with currently available bandwidth. Tenants who desired faster bandwidth expressed frustration with speeds slower than 20-50 Mbps. These individuals were more concerned with reliability (uptime and throughput) and the impact on their general productivity due to slow browsing, file transfer delays and similar bandwidth constraints.

Measuring Against Other Cities

To chart how other cities’ innovation hubs are providing gigabit access, KC Digital Drive conducted a study of eight leading facilities, including the Techpad (Blacksburg, Va.), The Co.Lab (Chattanooga, Ten.), The Brandery (Cincinatti, Oh.), The Opportunity Machine (Lafayette, La.), CoCo (Minneapolis, Min.), Capital Factory (Austin, Tex.), T-REX (St. Louis, Mo.) and San Leandro Coworking (San Leandro, Cal.). All but three of these programs either offered gigabit service or were equipped to do so.

Of the five offering active gigabit services, two of them – the Co.Lab and Opportunity Machine – have programs dedicated specifically to entrepreneurs using the gigabit. Of its seasonal GIGTANK program, Chattanooga’s Co.Lab claims: “As the first and only startup accelerator wired to a metro gigabit network, GIGTANK attracts world-class talent to Chattanooga each summer, as well as ongoing recognition from tech circles across the globe.”

This is the kind of recognition and talent-attraction that many in Kansas City would like to see. KC Digital Drive believes the first step in making our entrepreneurial community move faster is making sure they have access to the gig.

As a result, KC Digital Drive is working with community partners to launch Gigaspots, a program that, once live, will aim to provide local entrepreneurs with a much-needed link to the gig.

“We get requests on a regular basis for access to gigabit fiber from innovators and entrepreneurs who are developing a product or just testing a hypothesis, and we do our best to help them find the resource they need,” said KC Digital Drive’s Aaron Deacon. “With Gigaspots, we’re bringing a little bit more structure to that process and hopefully greater visibility to places that offer this kind of connectivity.”

KC Digital Drive is seeking entrepreneurs and app developers with gigabit-centric ideas but no connection to a fiber network. Interested parties should fill out the form at gigaspots.org.

Once enrolled, these entrepreneurs will be matched with Gigaspots access at one of the following locations: